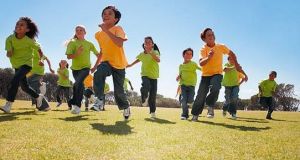 “If children don’t have a solid foundation of basic movement skills how can we expect them to do more complex skills as part of organised sport?” Photograph: Getty Images

One in four primary school children cannot run properly and lack basic movement skills, according to a new study.

In addition, one in two children cannot kick a ball properly, and less than one in every five can throw a ball.

The findings are contained in a study by researchers at Dublin City University (DCU), who have carried out an all-Ireland study of over 2,000 primary school children.

Dr Stephen Behan of DCU said the study was the most comprehensive of its kind ever produced in Ireland, and highlighted the poor levels of basic skills in Irish children.

“If children don’t have a solid foundation of basic movement skills how can we expect them to do more complex skills as part of organised sport?” he said.

“This solid foundation is what allows children to take part in a multitude of physical activities, and to feel confident in trying new things.”

Existing research shows that mastery of these basic skills is achievable by eight years of age.

This milestone is considered significant as children who do not reach it risk exhibiting an aversion to engaging in sports and physical activity, particularly in their teenage years.