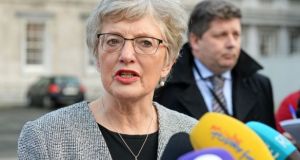 Childcare providers who close their doors next week to participate in a day of protest calling for solutions to the childcare crisis will receive their State payment as usual, the Minister for Children has said. Photograph: Eric Luke/The Irish Times.

Childcare providers who close their doors next week to participate in a day of protest calling for solutions to the childcare crisis will receive their State payment as usual, the Minister for Children has said.

The Department of Children had previously issued a circular warning that those who took part in next Wednesday’s protest would lose funding for the day if services were shut.

Following harsh criticism from the childcare sector, Minister for Children Katherine Zappone announced on Thursday that payments would be authorised as long as providers found an alternative date for parents to avail of childcare services.

The departmental statement noted that the decision to reinstate payments came “having considered the concerns and circumstances of the childcare sector”, adding that the minister had, “always supported better pay for childcare professionals”.

Hundreds of childcare facilities across the country will close on February 5th as workers, providers and parents take part in a protest in Dublin’s city centre.

The Early Years Alliance, which is organising the protest, has waned that under-funding of the sector has reached “crisis point” and are calling for a “sustainable solution to the worsening childcare crisis”.

Sean Sherlock, Labour party spokesperson on children, accused the department of penalising crèche owners for taking part in the protest following the release of the initial circular and called on the minister to clarity whether she had requested the halt in payment.

“These workers are highly qualified and yet are being paid well below the Living Wage, leading to a high turnover of staff in the industry,” Mr Sherlock said. “As the Minister at the helm of the Department, the buck stops with her and all those in the sector deserve to know who signed off on it.”

Responding to the announcement that payments would be authorised, Elaine Dunne, chairwoman of the Federation of Childhood Providers, said the initial decision to dock crèche workers’ pay “should never have happened in the first place”.

Some 1,500 providers have already signed up for next week’s protest with many more expected to get involved, said Ms Dunne, adding that crèche owners across Galway, Cork, Mayo, Dublin and Kildare had committed to take part.

“The real thing here is we want our funding. We want a fair and equitable system, we want streamlined inspections and we want proper funding from the Government for parents and crèche providers.”

Election candidates who claim in their manifestos to support better pay for childcare workers and lower cost childcare facilities for parents should “negotiate with us, sit with us and listen to the groups that are out there,” she said.

Darragh O’Connor, Siptu’s head of strategic organising, welcomed the minister’s decision to reinstate pay for those taking part in the day of action, noting that the protest was about “the future of years in Ireland, high quality decent jobs and high quality and affordable healthcare here professionals are paid a professional wage”.

More than six out of ten creche workers are earning below the living wage while Irish families must pay some of the highest fees in Europe for childcare, said Mr O’Connor. “This is what the next Government needs to tackle. We have to make childcare a priority.”