‘I get paid to learn. I couldn’t recommend it enough’

Lee Devery is completing a two-year apprenticeship in property services. He is one of thousands of school leavers to choose 'earn and learn' options over higher education 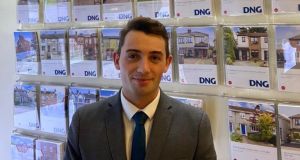 Lee Devery: 'For me it’s the best way to learn: it’s hands-on and you practise what you learn'

Lee Devery (23), recalls being “constantly” told by teachers in secondary school that university was the best route to take after school.

He never followed their advice.

Now he is completing a two-year apprenticeship in auctioneering and property services and is delighted with his decision.

“I really feel like this is a much better option,” says Devery. “I wasn’t much into the books in school and I don’t think I’d have lasted in third level anyway.”

Instead of paying third-level registration fees of €3,000 a year for a college course, Devery is currently being paid €20,000 a year as part of his “earn and learn” course.

He spends four days a week with the estate agent DNG and attends college at Ballsbridge College of Further Education one day per week.

At the end of it he will have an advanced certificate in auctioneering and property services and will be eligible to apply for an official licence, which is needed to work in the sector.

“I went straight into the hospitality sector after school and worked there for two and a half years,” says Devery.

“I was interested in getting into property, but didn’t have the confidence to do it... a friend who is a real estate agent told me about this.

“I weighed it up... I did the interview, it went very well, and for me it’s the best way to learn: it’s hands-on and you practise what you learn.”

Property services is one of a raft of new “white collar” apprenticeships, with registrations jumping from just over 50 in 2018 to 90 this year.

“There are people doing the course who have lots of experience, but don’t have the licences, so it’s also a route for them to do it,” adds Devery.

While the basic salary is €20,000, he says there is also commission to be made from selling and renting, as well as expenses.

“I could have ended up in a third-level degree course, studying for four years, working part-time to pay for it. But here I get paid to learn. I couldn’t recommend it enough.”

Surging
Overall, apprenticeships are surging. The number of school-leavers choosing “earn and learn” options has more than doubled in recent years.

Apprenticeships typically involve a combination of learning on-the-job with an employer as well as studying in college.

Many new apprenticeships are in areas such as accounting, technology, insurance, laboratory analysis and sales; they typrically pay learners between €17,000 and €30,000 a year.

Most offer a certificate or degree-level qualification at the end or a two- or three-year programme.

While apprenticeships are growing in popularity, there is still a major gender gap in the sector, with women accounting for just over 3 per cent – or 600 – of the 17,500 apprentices.

This is because the  bulk of learners are still in traditional craft areas – such as construction, electrical, engineering and motor mechanics – which are dominated by men.

There is a much more even gender representation in this latter category which span areas such as financial services, laboratory analysis, hospitality and sales.

In many of these new programmes, the number of potential apprentices applying for positions is higher than the number of employers available to employ them.

For example, in the case of tech apprenticeships last year, there were more than 1,500 applications for just 34 apprentice jobs in the civil service.

In the case of the accounting technicians’ apprenticeship, each year there have been on average three applications for every available job.

Solas is planning for significant growth this year with a further 23 new apprenticeship programmes due to be launched.

These new programmes will include training for the occupations of recruitment executive, sales specialists, advanced healthcare assistant and quantity surveyor.

While demand is growing, Solas, the State body with responsibility for the sector, says employer take-up of new apprenticeships developed since 2016 by employers has been slower than envisaged.

Obstacles
Some groups such as the Restaurants Association of Ireland say a key obstacle is the fact that employers must pay apprentices while they are at college.

This is in contrast to other apprenticeships developed before 2016 – such those in the construction sector – where a training allowance is paid by the State to apprentices while attending off-the-job training.

Solas has said this arrangement was a policy decision taken as part of the apprenticeship review in 2014.

It says the new apprenticeship system was developed in consultation with educational institutions and industry and was aimed at allowing more flexibility in their design.

Overall, it says, the number of participating employers is rising year-on-year.

The numbers of employers hiring apprentices on the “new” apprenticeship programmes is increasing with a total of 540 employers in 2018 compared to around 1,000 at the end of 2019.

Latest figures show there are more than 6,000 apprenticeship employers, compared to about 3,500 in 2015.

To support apprenticeship expansion, the Government is due to provide an additional €27 million to develop the sector this year.

Solas is planning to continue its “generation apprenticeship” campaign this year to boost awareness among school-leavers, and has also launched a new “apprenticeship jobs” platform online at apprenticeship.ie to make it easier to find vacancies.