More than 90% employment for UCC graduates 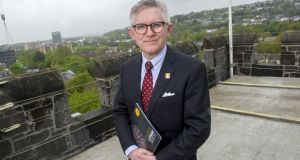 University College Cork graduates and postgraduates are finding employment at rates of over 90 per cent while the university itself is employing 15,000 and contributing over €850 million to the Irish economy through expenditure and tax payments, a new study has found.

Entitled “The Economic and Societal Impact of University College Cork”, the report also states that UCC’s education programmes are enjoying a first-year retention rate of 93.4 per cent which is “on a par with elite third-level institutions in the US”.

UCC president Prof Patrick O’Shea said it also found that graduates, who remain and work in Ireland, create extra economic value of up to €24.8 million for the economy in the first year after graduation, compared to non-university graduates.

The study, by Prof Mark Hutchinson and David Hogan of Cork University Business School, also found that UCC supports 14,708 jobs on an annual basis which equates to approximately 1 in every 15 jobs in Cork city and county, thus highlighting the university’s importance to the local economy.

It found UCC’s economic impact amounted to €853 million per annum – or €2.3 million per day – composed of an annual expenditure of €728 million and annual contribution through taxes and social insurance of €125 million, a return of €5.68 to the Irish economy for every €1 of State funding.

Looking ahead, Prof O’Shea said that the report, which took 2016 as its year of reference and took six months to complete, predicts that UCC’s €241 million development plan, spanning the years 2017 to 2022, will support a further 11,482 full time jobs.

The approved development plan alone, which excludes key strategic projects such as the new business school at the former Permanent TSB building on Lapp’s Quay in the city centre, will impact positively on the local economy to the tune of €446 million, he said.