Bodies of pilot and boy (7) recovered from crashed light aircraft 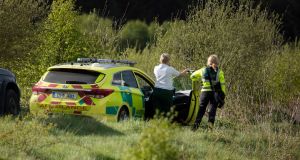 Emergency services at the scene of the crash of a light aircraft near Clonbullogue, Co Offaly, on Sunday. Photograph: Eamonn Farrell/RollingNews.ie

Gardaí have recovered two bodies from the scene of a plane crash in Co Offaly tonight.

The 7-year-old boy and the plane’s pilot were pronounced dead at the scene of the crash.

The pilots is understood to be a UK national who was visiting the Irish Parachute Club. He was flying a Cessna Caravan aircraft.

The young boy’s father was one of 16 parachute jumpers who had exited the plane before the tragic crash. It’s understood the man, who is originally from Poland but living in Dublin, is a regular jumper with the club and he went to the crash site after the crash.

The remains of the victims are being removed to the Midland Regional Hospital, Tullamore where a postmortem is due to take place.

An eye witness described the plane descending “like a torpedo” before it crashed.

The 16 parachute jumpers had exited the plane at normal altitude with no difficulties, having taken off from the Irish Parachute Club in Clonbullogue – about 5km from Edenderry – at 2.25pm.

Gardaí had been holding out little hope of recovering either the man or the boy alive from the aircraft as the rescue effort continued after 9pm on Sunday.

Local man Jimmy Slattery was out walking his dog near Clonbullogue when he heard the plane’s engine roar and saw it crash. “It just came vertically down. There was no wavering in it or anything, flat out, the engine roaring. When it got near the tree line, I heard a thump then and that was it, that’s all I can say. That’s all I know,” he said from the crash scene.

“I thought he was actually doing a stunt and I was waiting for them to pull out but it never happened, sadly,” the local man said.

Mr Slattery – whose son is Clonbullogue-based musician and film maker Paddy Slattery – called the emergency services and waited at the scene to direct them to the crash site.

Mr Slattery said the sound of planes taking off and landing wasn’t unusual in the area, and the noise he heard wasn’t dissimilar. “It was loud, very loud as if it was taking off, that sort of a roar,” he explained. He said the aircraft came straight down “like a torpedo” from the sky.

Gardaí cordoned off the site while emergency services worked at the scene. Soon after investigators from the Air Accident Investigation Unit(AAIU) arrived at the remote bogland a number of kilometres from the parachute club in Clonbullogue.

The AAIU set up their own cordon and it’s understood digging machinery was needed in order to try to remove the aircraft from the bog, as the force of the impact had driven it into the ground.

Members of the Civil Defence, Offaly Fire Services, and gardaí set up a road block not far from the crash site and a number of local people attended the scene.

Local man Oliver Smyth said “it would be a huge shock to the area. The parachute club would be well known, they are in this area 20 years,” he said. Mr Smyth described the crash as “very, very sad” and said the club had operated safely in the area for years. “It’s very, very sad for everyone involved in the club”.

Edenderry-based Councillor Noel Cribbin (Ind) said the whole community is in a state of shock at news of the accident. “The Irish Parachute Club is over 20 years in Edenderry and run to the highest standards, so it was a big shock to hear of an accident of this type,” he said.