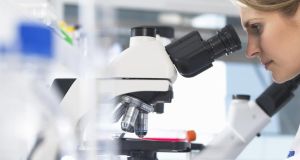 CervicalCheck: the HSE said its screening programme is safe and effective and that its three laboratories “are operating within expected international standards”. Photograph: Rafe Swan/Cultura/Getty

General practitioners have been told by the Health Service Executive that an “urgent new screening test is not clinically indicated” for women concerned about the cervical-cancer-screening scandal.

But, in the same letter to GPs, the HSE has said that, “due to the worry created by the CervicalCheck audit”, women could ask for a free consultation and, if they had “specific indications or remain concerned, they may also access a new, free screening test”.

The letter was sent on Wednesday, May 9th, by Damien McCallion, who oversees the National Screening Service, and Dr Jerome Coffey, director of the HSE’s cancer-control programme. The impact of the commitment “on the capacity of GP services” would be assessed in three months’ time, the HSE officials said.

Last week Tony O’Brien resigned as director general of the HSE over the ongoing cervical-screening controversy. It has emerged over the past two weeks that 209 women who developed cervical cancer were not told that subsequent audits found previous smear tests incorrectly gave them the all-clear.

“Our clinical advice is that all women should continue to participate in the cervical screening programme according to their normal schedule,” the letter said. It added that the screening programme is safe and effective and that the three laboratories contracted to read or report on smear tests “are operating within expected international standards”.

Although the HSE has said it will pay GPs €50 per consultation, the letter outlined potential data-protection problems when doctors gather the information they need to claim the fee. GPs were told to submit each woman’s medical-card or GP-visit-card number or, for women who held neither of these cards, her PPS number. “The HSE is seeking legal advice on the use of the PPSN for this process, and advice from the office of the Data Protection Commissioner, ” the letter said.

Mr McCallion and Dr Coffey told GPs they were relying on doctors’ support in “rebuilding confidence” in the cancer-screening programme. But women who recently went for smear tests will have to wait at least three months before having a repeat examination, “as there will not be enough cells to test” before this, according to online guidelines provided to GPs by the HSE and the CervicalCheck programme.

The guidelines also stressed that there is “no evidence” to suggest the clinical elements of the screening programme are faulty. “The quality of smear-taking by doctors and nurses is not in question,” they said. “All of the contracted laboratories which currently look for abnormalities in smears have passed all quality control tests and are operating to international standards”.