Brexit: Coveney position on Border ‘no threat’ to unionism 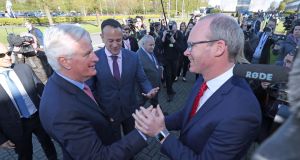 Tánaiste and Minister for Foreign Affairs Simon Coveney (right) with the EU’s chief Brexit negotiator Michel Barnier. On Sunday, Mr Coveney said a political solution was being talked about “that prevents the need for Border infrastructure”. File photograph: PA

Tánaiste Simon Coveney said the Irish Government is “not flexible” over the possible deployment of any physical infrastructure along the Irish Border following Brexit.

The Minister for Foreign Affairs also warned of a “very difficult summer” if a workable solution for the Border was not achieved by June.

His comments came on Sunday in the wake of divisions in the British cabinet over the failure so far to agree a detailed policy on the Border post-Brexit.

A proposal by British prime minister Theresa May for a customs partnership arrangement perhaps involving the UK collecting import tariffs on behalf of the EU has been rubbished by foreign secretary Boris Johnson as “crazy”.

Environment secretary Michael Gove said there were “significant question marks” over the customs partnership option favoured by the prime minister.

Mr Johnson has criticised the idea of a partnership or shared customs territory, insisting it would prevent the UK from taking back control of its trading policies.

Responding to Mr Coveney’s remarks, Democratic Unionist MP Sammy Wilson, one of Mr Coveney’s most vocal critics, branded him “belligerent, interfering and Brit bashing” and accused him of trying to break up the UK.

On Sunday, Mr Coveney said: “To be honest, we don’t take our lead from Boris Johnson, we take our lead from the prime minister Theresa May. She has signed up for very firm commitments – and I believe her by the way. She made those in good faith.”

He said Ms May’s vision of a partnership – where the UK collects tariffs on behalf of Brussels – could provide the basis for negotiating a solution to the vexed problem of maintaining a free-flowing Irish Border.

Mr Coveney said the UK had made a clear commitment in last December’s agreed UK/EU text that there would be no physical infrastructure on the Border.

This backstop would mean regulations between Northern Ireland and the Irish Republic would continue to align post-Brexit, even if a broader trading deal between the UK and EU failed to materialise.

Speaking on the BBC’s Andrew Marr programme, Mr Coveney said the Irish Government had shown flexibility in agreeing to broader negotiations going on, despite reservations about the agreement in December.

He added: “We are simply asking that that [backstop] commitment be followed through on.” He said Brexit negotiations would face a “difficult summer” if the UK government failed to honour its commitment to agreeing a “backstop” in the withdrawal treaty.

On Sunday, Mr Wilson accused Mr Coveney of burying his head in the sand by refusing to consider technological solutions.

“The fact is that the Border issues can all be dealt with by technology, but Coveney and co have stuck their head in the sand refusing even to consider this solution.”

A hard Border and the break-up of the UK in terms of different regulatory systems had been ruled out, the East Antrim MP said.

“That leaves only one solution. That’s the solution of using the technology that is available, and of course getting a deal between the UK and EU which gives free trade arrangements, an arrangement which suits both sides.”

“Instead, he tried to flog his ‘pig in a poke’ solution to the EU negotiators and force it down the throat of the UK government.

“It won’t work. The IRA failed to dislodge Northern Ireland from the UK with bombs, Coveney won’t do it with Brexit.

“The UK always has the option to walk away from these negotiations with no deal.

“That really would set the cat among the pigeons as far as the Irish economy is concerned because most of their exports to the UK would face huge tariffs, and of course the import substitution which would result would massively benefit Northern Ireland agriculture and food processing.

“Think about that Mr Coveney – it might cool your republican ardour.”

Separately, Ms May on Sunday reiterated her intention to withdraw from the customs union without imposing a hard Border in Ireland.

Writing in the Sunday Times, she said “there will have to be compromises” but any deal must honour the NI peace agreements.

A spokesman for the Tánaiste said nothing he had said on the Andrew Marr show was a threat to unionism.

Responding to Mr Wilson’s remarks on Sunday evening, he said his position was quite the opposite.

“Nothing the Tánaiste suggested to the BBC is a threat to unionism, quite the opposite in fact,” the spokesman said.

“Many unionist communities and politicians are in ongoing contact with the Government, and they too want the closest possible relationship and ongoing prosperity on the island of Ireland after Brexit.

“Tit-for-tat and hyperbole has never solved anything in Ireland.”

He said the Tánaiste and the Government had been very clear that they recognised and respected that Northern Ireland would leave the EU with the rest of the UK next March.

“However, the EU and the UK have agreed that there will be no Border or related infrastructure on the island of Ireland, and important negotiations to protect the gains of two decades of peace are ongoing.

“We welcome prime minister May’s restating of that commitment in her article in today’s Sunday Times.” – Additional reporting PA