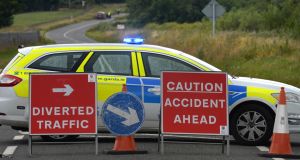 A male motorcyclist has died following a collision in Co Westmeath.

A motorcyclist in his forties has died after his motorbike collided with a pole in Drumcree, Collinstown, Co Westmeath at 11am on Sunday.

No other vehicles were involved.

The man was pronounced dead at the scene and his body has been brought to the Midland Regional Mullingar. A postmortem will be carried out on Monday.

His death brings to 57 the number of people killed in road crashes so far this year.