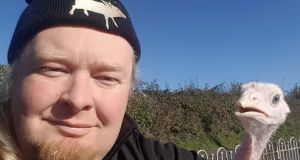 Clive Clarke: his property on the Tipperary-Offaly border was broken into for the seventh time in 15 years, once again causing financial loss, worry, anxiety, but also filling him with foreboding.

“Yes, the monetary thing is one thing but it’s the effect it has. It’s the fear. The suspicion of everything,” says farmer and butcher Clive Clarke.

Just over a week ago, his property on the Tipperary-Offaly border was broken into for the seventh time in 15 years, once again causing financial loss, worry, anxiety, but also filling him with foreboding about the road this country is travelling on when it comes to crime.

“The fear is that what’s going to happen is that rural Ireland, as a whole, will get fed up and stand up and fight back. Something nasty is going to happen somewhere in the country and that’s the big fear,” he says.

Based at Barna, Dunkerrin in Co Offaly, but within the Tipperary Garda division, Clive Clarke lives with his wife and two children and runs an artisan butcher business on the land where he farms pigs and poultry, alongside the land where his father David keeps cattle and sheep.

If the local police can’t deal with it [rural crime], a task force is put into the area

“I have a bunch of keys with 37 keys on it,” he says. “The workshop has three different locks on it.”

Yet this workshop was burgled last week. “They took off galvanised sheets and got in through that.”

Tools and equipment were stolen, but it “wasn’t the biggest robbery in the world” compared to a previous incident three years ago when €15,000 worth of goods were taken.

“There’s been three robberies in three weeks within half a mile and ours is the only one that was reported. People don’t want to report it. There’s an element of shame, there’s an element of embarrassment and there’s the fear of reprisal. They don’t want the attention, nobody wants to talk about it. They suck it up and try and get on with it.”

His latest experience came days before a number of Independent rural TDs successfully put forward a motion in the Dáil calling for a dedicated rural crime task force as well as a review of the bail laws in a bid to prevent repeat offending. They also called for a review of the trespass laws to strengthen the rights of landowners and householders to protect their property and themselves.

“Rural communities are very much open to active collaboration with the gardaí and with all the various agencies and departments that can help in reducing the incidence of rural crime,” says Independent TD Mattie McGrath.

They’re basically taking your way of life and trust in people. That’s the real crime

The concept of a specialised task force is one that has been pushed by the IFA in recent months, particularly since a number of officers visited the UK and saw similar units in operation.

“In England,” IFA deputy president Richard Kennedy says, “if the local police can’t deal with it [rural crime], a task force is put into the area. The IFA believe it can be transferred here. It might consist of a force of maybe half a dozen officers and they would come into an area and help out the officers that already exist there.

“It would be mobile, from the point of view that it would move around the country to areas where it would be needed and it would help out where the local gardaí would be stretched.”

Such a proposal was put to the Garda Commissioner Drew Harris by IFA members late last year and will be followed up at a further meeting in March.

IFA crime prevention officer Barry Carey says that co-operation and communication within communities and within regions is the key to warding off crime.

“There’s a certain bravado among the criminal element, that has to be taken back to community level. We need greater engagement and co-ordination and if that doesn’t happen we’ll still be talking about this in five years’ time.”

The IFA and its members are supportive of the efforts of the gardaí but a concerted effort is needed, Mr Carey says.

He hailed the recently-established North Dublin Rural Crime Patrol, involving a WhatsApp group of local farmers and householders who report anything suspicious; dedicated gardaí who have mounted hundreds of checkpoints and rural patrols; and co-operation from the National Parks and Wildlife Service and the Garda Air Support Unit to monitor farmlands from the air, and said it should be extended nationwide.

“People are exceptionally happy over the last couple of months with what has been driven by the IFA,” Mr Carey says. “The north Dublin approach is the way this should go.”

He points out that while the issue of rural crime hasn’t been as prominent recently as before, it that doesn’t mean it has gone away. “People are living in genuine fear.”

Clive Clarke says: “You can work to get over what is taken and you can build things back up and we’re lucky enough to have our health and can do that, but they take away so much more than the physical things they take. They’re basically taking your way of life and trust in people. That’s the real crime.”