‘I looked at a spot on the ceiling because I found it most uncomfortable,’ man says 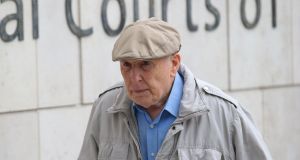 Michael Shine (86) of Ballsbridge, Dublin has pleaded not guilty at Dublin Circuit Criminal Court to 13 charges of indecent assault allegedly committed during medical examinations at Our Lady of Lourdes hospital in Drogheda, Co Louth and at two private clinics in Drogheda.

On the fourth day of the trial, a man told Cathleen Noctor SC, prosecuting, that he began experiencing stomach cramps when he was 10 years old. He was aged around 11 when later referred to Mr Shine at Lourdes hospital in early 1974.

The man said he was brought into a room by a nurse and left on his own with Mr Shine. He was asked to undress down to his underpants and put on a hospital gown so that he could be examined.

He said Mr Shine first examined his throat, torso and abdomen, before taking his underpants down and placing one hand on his penis and one hand on his scrotum and “palpitated” them both.

“I looked at a spot on the ceiling because I found it most uncomfortable,” the man said. He said the defendant groped his testicles and it felt as though he was pulling his foreskin down.

He said that it felt like it lasted forever and that he wanted to scream but was unable to speak.

The man said that after he finished, Mr Shine told him that he was a “nice boy” and went to speak to his parents who were sitting outside the room. He said Mr Shine told his parents that he had to perform a rectal examination on their son and returned to the room, closing the door behind him.

He said Mr Shine asked him to raise his knees up so that he was “almost in a foetal position”. He said that Mr Shine inserted a gloved finger into his anus and his other hand began “palpitating” his genitals again.

The man said that after he finished Mr Shine removed his gloves, told him that he was a “good boy” and patted him on the head.

He said that a number of months later that year he “fainted” while walking his dog and was rushed to Lourdes hospital. He said that he stayed in hospital for 20 days and that on third day he underwent surgery.

The man said that Mr Shine would carry out examinations on his wound from surgery and that every time he did so he would go on to “palpitate” his penis and scrotum.

“I used to just look out the glass window, there was a flashing light miles away and I would focus on the light until he was finished,” the man said.

He said that Mr Shine did this every day up until the day he was discharged from hospital. He said there was no particular time of day that this happened and that it could occur in the morning, the afternoon or at night.

The man agreed with Hugh Hartnett SC, defending, that he had brought civil proceedings relating to the alleged offences and said that the proceedings had concluded in 2012.

Mr Hartnett asked the witness if he drank much alcohol and he answered he was proud to say that he had not drank since 2004.

He totally rejected Mr Hartnett’s suggestion that none of what he had described had happened and that he was mistaken in his recollections.

The trial continues on Wednesday before Judge Martin Nolan and a jury.