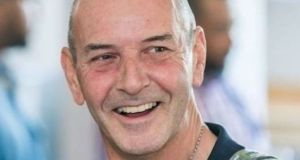 The Congolese man accused of murdering Irish charity worker John Curran in Cape Town last year was denied the chance to apply for bail on Wednesday because there was no French interpreter available to translate the hearing.

Democratic Republic of Congo national Mitspa Onyoka (24) was remanded back in custody to Pollsmoor Maximum Security Prison in the Cape Town suburb of Tokai until March 12th next, when his bail hearing was rescheduled to.

Both the prosecutor and Mr Onyoka’s defence attorney told Magistrate Gregory Jacobs they were ready to proceed with the bail application, but the court heard that the French translator assigned to the hearing was currently out sick. As a result the hearing was postponed.

South Africa’s National Prosecuting Authority has indicated it will oppose Mr Onyoka’s bail application on the grounds that he no longer has a fixed abode and the department of home affairs has no record of him being legally entitled to stay in the country beyond 2015.

However, at his last appearance in court shortly before Christmas Mr Onyoka insisted that he wanted to apply for bail despite being told by his lawyer that he had little chance of success.

Mr Onyoko, who appeared in court on Wednesday wearing a tracksuit bottoms and a hoodie, must now wait a further seven weeks behind bars in one of South Africa’s toughest prisons before getting his chance at freedom.

Dubliner John Curran, a former school principal in Ireland, was found stabbed to death in an apartment he was renting in downtown Cape Town on November 12th last year.

The 60-year-old had just spent two years working as an education director for Irish NGO Mellon Educate in the Western Cape Province’s capital when the incident happened.

He was taking a short holiday when the attack occurred and was scheduled to return home to Ireland before Christmas.