Student hit by bus at red light crossing for pedestrians settles action for €250,000

She was hit by bus in Dublin, thrown in the air and landed near back wheels of bus 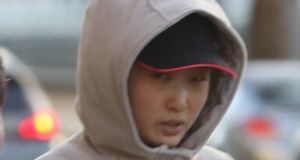 A student who suffered a severe head injury after being knocked down by a bus when crossing a Dublin city street with the red light showing for pedestrians has settled her High Court action for €250,000. Shu Zhang is now able to walk but needs looking after full time after suffering the brain injury in 2004, the court heard.

She was hit by a Bus Éireann bus at Aston Quay, Dublin, thrown in the air and landed near the back wheels of the bus. She was unconscious and in a coma for eight or nine days after the accident.

Her family, who travelled from China to care for their daughter after the accident, told Mr Justice Kevin Cross they were not happy with the amount of the settlement offer.

The judge said, had the case gone to trial, Ms Zhang may have lost and could end up with nothing at all.

The court had been told some witnesses to the accident had reported seeing Ms Zhang push her way gently through those waiting to cross the road and stepping out on to the road.

The judge said the evidence of the witnesses, except possibly one person, suggested Ms Zhang could lose the case.

Ms Zhang (36), Parnell Street, Dublin, had, through her aunt Shao Zei, sued Bus Éireann as a result of the accident.

It was claimed she was knocked down by a bus as she attempted to cross the road at Aston Quay on October 12th, 2004. She alleged failure to brake, slow down, steer, direct or otherwise manage or control the bus so as to avoid the collision. She further claimed the bus was being driven without any adequate regard for the presence and position of other vehicles or pedestrians, including herself.

Bus Éireann denied all the claims and pleaded Ms Zhang had suddenly and without warning emerged from a crowd of waiting pedestrians and into the path of the bus while it was lawfully travelling on the road.

It pleaded Ms Zhang failed to heed the pedestrian light at the Aston Quay crossing which at the time of the accident was red for pedestrians. It was claimed the young woman allegedly failed to look to her right to check if there was oncoming traffic when she entered on to the road and failed to wait until the bus had passed before attempting to cross the road.

Jerry Healy SC, for Ms Zhang, said she was aged 22 at the time of the accident. He said another man who had crossed the road before her made it across safely and he heard the impact. Ms Zhang had come to Ireland in 2003 and was a student and a part-time care assistant, counsel said.