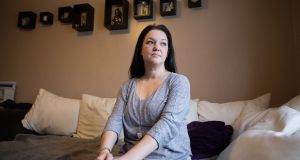 Campaigner Shaneda Daly says offenders who change their plea years after being charged “should be penalised instead of being rewarded”. Photograph: Eamon Ward

Shaneda Daly is one of Ireland’s most powerful campaigners for abuse survivors. She’s helped set up an umbrella group for others like her, called Survivors Side by Side, that is slowly growing through social media.

Her father was sentenced to 15 years’ imprisonment with the final five years suspended in July 2011 for rape and sexual assault. Harry Daly, from Lissycasey in Co Clare, signed each of his 227 guilty pleas.

“My father pleaded guilty when he was charged,” Ms Daly said. “From when I made my statement to sentencing it [the case] was one year.”

However, her case was very much the exception. “It’s shocking to realise that most cases [in the Central Criminal Court] last on average four or five years and some a lot longer.”

By the time a victim finds the courage to go to the Garda Síochána, it could be years before charges are brought. It could be years, again, before the court case is finally concluded.

Ms Daly said the most serious sex offenders and rapists in Ireland regularly changed their plea at the “last minute”, sometimes after a jury had been sworn in to hear the evidence. “And then these people are treated with the same credit as someone who pleaded guilty from the beginning.”

In the years between being charged and pleading guilty, she said “this person has had no regard to the victim and the trauma of not being able to move forward in their lives”. She said “victims spend years in limbo” in the time between finding the courage to go to gardaí and the end of the trial.

There is case law to say sentencing courts must consider the timing of a guilty plea but the reality is time moves slower in a courtroom than real life. Sentencing judges frequently give credit to offenders for so-called “early pleas of guilty” but some of these pleas have been entered years into the process.

Ms Daly said offenders who change their plea years after being charged “should be penalised instead of being rewarded”.

“Why have a system that lessens time and emotions and trauma if you can change your mind years after and get the same result?”

She said the credit afforded to the timing of an offender’s guilty plea needed to be examined by sentencing judges. “There should be a tiered system. And definitely the person who changes their mind while in the court – when they realise they will receive a guilty verdict – should in no way get the same rights as someone who spares the victim years of their lives” dreading about having to give evidence in court.