Suspects were not on Garda watchlist of Islamist extremists in Republic 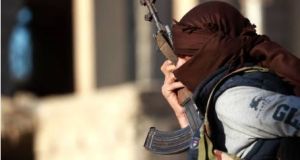 A group of Dublin-based Isis fundraisers was collecting money in the Republic and sending it to the terrorist group in Syria while staying below the radar of international security services, gardaí believe.

After an inquiry by specialist Garda units, four people were arrested yesterday morning.

Gardaí believe at least tens of thousands of euros was sent to Isis in Syria.

A number of addresses were also searched yesterday, including in Dublin’s north inner city.

One of the suspects is male and his sister and his partner were also detained. A third woman under arrest is believed to be the former partner of the man being questioned.

The Garda has had suspected Islamic State, or Isis, sympathisers, fundraisers, recruiters and foreign fighters on a watch list for well over a decade.

However, it is understood the four people under arrest late last night were not being watched over a long period of time.

They came to the attention of the Garda more recently after evidence emerged suggesting money transfers from Dublin had been made to Syria.

The four suspects, aged in their 30s, 40s and 60s, were being held at the Bridewell and Irishtown Garda stations last night.

During the searches, which were based on intelligence about suspected international terrorist financing, gardaí found €4,500 in cash as well documents and electronic equipment.

A Garda statement said the suspects, who are from a former Soviet republic, were arrested over “suspected terrorist financing contrary to section 13 of the Criminal Justice Terrorist Offences Act”.

Gardaí are permitted under law to question them for 24 hours. When that period expires they must be charged with criminal offences or released without charge.

A total of six searches were carried out during yesterday’s raids after an inquiry by the Special Detective Unit, which investigates terrorism as well as the Garda National Economic Crime Bureau and the force’s security and intelligence branch.

It was not immediately clear how the first evidence emerged about the cash transfers believed to be from Isis sympathisers and fundraisers in Dublin and sent to Isis in Syria.

However, police forces and security services around the world have tipped each other off when suspected terrorist activity is detected in another country.

The Garda has already dealt with a number of Islamist extremists who sought to fundraise for and offer other support to Isis and al-Qaeda.

In the case of Ali Charaf Damache, a one-time Waterford-based al-Qaeda figure, the US authorities relayed to the Garda the initial information that led to his arrest in 2010.

He was initially targeted over his involvement in a plot to kill Lars Vilks. The Swedish cartoonist had depicted the prophet Muhammad with the body of a dog.

Damache was later charged with threatening a US lawyer over the phone while based in Ireland.

On his release from prison in Ireland he was arrested in Spain and extradited to the US.

He is currently serving a 15-year sentence, for aiding terrorism, in a maximum security facility in the United States. The Irish Government is currently in the process of trying to strip him of his Irish citizenship.