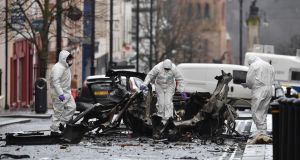 Forensic officers inspect the remains of the van used as a car bomb on an attack outside Derry Court House on Saturday. Photograph: Charles McQuillan/Getty Images

The same dissident republican group that police believe was responsible for a car bomb in Derry on Saturday are also believed to be behind series of security alerts on Monday.

Superintendent Gordon McCalmont told reporters in Derry the main line of enquiry was that the New IRA were also responsible for three security alerts which led to widespread disruption in the city.

He said he believed it had been an attempt to disrupt the Police Service of Northern Ireland’s investigation into the explosion outside the city’s courthouse on Bishop Street.

“It actually challenged us in terms of managing the Bishop Street scene,” he said.

A 50-year-old man remains in custody in connection with the bomb.

On Monday three delivery vans were hijacked and their drivers ordered to abandon them in locations in Derry, causing security alerts in the Circular Road and Southway areas of Creggan, and outside St Mary’s College on the Northland Road.

A number of people had to be evacuated from their homes during the security alerts.

There was also an attempt to hijack a bus in the Galliagh area of Derry.

Supt McCalmont confirmed that guns were used in two out of the three hijackings.

Supt McCalmont denied that the PSNI had been put under pressure because of the security alerts, and said he was confident he had the necessary resources.

“The evidence is there,” he said. “We dealt with four significant policing operations and we maintained a service to the community, dealing with 200 core policing incidents including robberies and domestic violence and we were not found wanting.”

The security alerts in the city have now ended and people have returned to their homes.

District Commander Superintendent Gordon McCalmont said: “We can confirm that all three alerts are hoaxes however we cannot underestimate the impact these incidents have had on our community.

He said he had a “proportionate community policing-based policing plan was in plan”, which did not necessarily mean more officers on the ground, but that there would be “effectively used policing”.

“I will have all the resources I need to manage the risk,” he said.

Supt McCalmont said he did not believe the attacks were related to Brexit.

“We have no sense of that at all. We don’t see this as Brexit-related.”

He made an appeal to witnesses, particularly those who might have dashcam or CCTV footage, to contact police .

“It’s been a particularly challenging couple of days for this community,” he said. “We have seen a bomb explode in the heart of the community, yesterday we saw three vehicles disrupting our community with hijackings left in key locations which impacted on family lives and the network of those in the community.

“My own personal emotions are of anger and frustration at the level of harm, the level of fear and the disruption that’s been inflicted on this proud community.

“Workers rights, human rights and democracy, all the things that this community has been built on have been massively eroded over the last couple of days.”

He paid tribute to the work of police officers and British army technical officers (ATO), and said he had been heartened by the support they had received from the community.

“We have had people apologising to officers when they’re being helped out of their homes apologising to them for having to stand there in the cold and thanking the ATO.

“I’ve been engaging with all partners and delivery agencies, we’re talking to them today to say Derry is open for business.

Assistant chief constable of the PSNI Mark Hamilton also said he has not seen anything that links Brexit to the bombing in Derry at the weekend or the hijackings on Monday.

He also said there was no evidence to support speculation that the incidents are a response to the 100th anniversary of the War of Independence.

Mr Hamilton told RTÉ’s News at One on Monday there was no specific information to connect the car bomb and the hijacking incidents and that doing so would be purely speculation.

On Monday afternoon, Northern Ireland Secretary Karen Bradley said the weekend bomb blast, which caused no injuries, had “absolutely nothing to do with Brexit”.

“These are plots and activities that these people have been working on and trying to carry out for many, many years and we need to be clear with them that those activities are not welcome, the people of Northern Ireland do not want to see this kind of activity on their streets.”

He said: “Let us not legitimise in any way what these people are about by ascribing to them a cause - these are people who want to destroy communities on both sides, who want to disrupt, who want to bring nothing positive and who have no agenda whatsoever, and therefore I totally support what the Secretary of State has said in that regard.” - Additional reporting Agencies