Concern at lack of sanctions for anti-social tenants 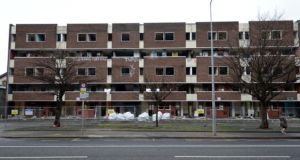 Cllr Críona Ní Dhálaigh of Sinn Féin said ‘the nuisance tenants should be encouraged to leave, not the good tenants’.

According to Michael Clarke, the Dublin area housing manager, who has responsibility for some 25,000 properties across the city, residents in council housing who sell drugs, dump waste illegally, and intimidate others tend to ignore multiple warnings from the council and have to be pursued through the courts.

“Our current policy seems to be a little bit lacklustre,” he told a Joint Policing Committee meeting on Tuesday. “It’s not threatening enough, to put it bluntly, because we’re not getting the right response to it.”

Mr Clarke said he carried out nine evictions last year, including one in the north inner city where his team required a garda escort, but that going to court was a complex process as it stands.

“They’re the serious ones. But for the other ones we need to come up with another plan. Because the plan we have is not working,” he said, adding that the legal process could take many months due to delays and appeals.

More and more I’m hearing that good tenants are leaving. The nuisance tenants should be encouraged to leave, not the good tenants

“And that has a negative effect on our communities who effectively think we’re really not doing anything.”

The council has hired a consultancy firm to examine how to deal with anti-social tenants, which Mr Clarke hoped would produce “the bible” for dealing with such cases.

Cllr Críona Ní Dhálaigh (Sinn Féin) said that “more and more I’m hearing that good tenants are leaving. The nuisance tenants should be encouraged to leave, not the good tenants.”

She suggested that new tenants should be subject to a “probation period” while community representative Marie Metcalfe said the local community should have a say in who can move in to an area.

Cllr Dermot Lacey (Labour) said he had been told about car brake lines being cut and stones “constantly” being thrown at doors.

“One of the saddest aspects of being a councillor is seeing good families intimidated day in day out by gougers, and gougers who know they’re going to get away with it.”