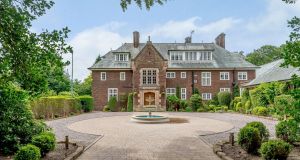 You’ve seen Selling Sunset – the Netflix blockbuster featuring high-end residential properties for sale in Los Angeles – now the British equivalent is coming. Just without the sunsets, or the perma-tans. Some of the UK’s most expensive properties will feature in a Channel 4 documentary airing over Christmas which takes viewers inside the homes of the super rich.

Jeannine Waddell, chief executive of Belfast-based Waddell Media is currently mid-shoot on a fly-on-the-wall documentary accessing the million-pound listings of the super rich. Waddell Media has teamed up with Sothebys International Realty to see inside some of the most expensive homes for sale in the UK.

It all started with Waddell’s own passion for trawling luxury property websites, a “guilty pleasure” that she could “easily lose a day to”. “The Sothebys website gets 34 million hits a year worldwide. I always thought it would make a good TV show.”

Having first worked with Sothebys three years ago on two series, World’s Most Expensive Cars and Million Dollar Car Hunters, Waddell gained access to the millionaire owners of supercars. That network fed into the idea for the new programme, but the first Covid-19 lockdown, which saw the departure of wealthy individuals from London seeking more space and greener pastures, became the catalyst for filming it now.

“We’re here to celebrate and marvel at these properties,” she says. “The people we’ve met are normal. They just so happen to be super-wealthy. It’s a subject that they are passionate about.”

Featured is the 1920s Birkenhead home of former Liverpool chief executive Peter Moore. An arts and crafts 14,000 sq ft property built in 1928 as a holiday home for the Holt shipping family in 2017 Moore refinished the wood floors and ripped out all the carpets, save for a bright crimson pile in the study – the perfect shade for the Reds leading man. During lockdown he placed 8ft high resin statues of The Beatles at his gate, dressing them in surgical masks and red scarves. The period pile on the market for £2.34 million is the perfect house for compound living, says Guy Bradshaw, head of London residential at Sothebys.

While coronavirus has seen British families leave London a number of Americans are still coming to rent and many Chinese are setting up home there having fled Hong Kong, Waddell explains. A 10-bed mansion in Highgate, with panoramic views over Hampstead Heath from the top floor office, has a £40million price tag. Built in 2009 it has a three-storey rotunda stairway and glass lift and is in a neighbourhood that’s home to actor Jude Law and model Kate Moss. Another London listing is David Adjaye’s black walled jewel box, Lost House, in Kings Cross, which is asking £6.5million.

Unfortunately the one-off show will not be featuring any Irish properties though the firm hope is it will become a five-part series and if so then a trip to Ireland is on the cards.

“It’s a glimpse into an aspirational world,” Waddell says. “The restoration work in some can be fascinating. Others do totally ghastly things.”

Is it a UK version of Selling Sunset? Bradshaw laughs: “It’s more selling rain and drizzle.”