The Ringsend coastguard station that became a perfect docklands home 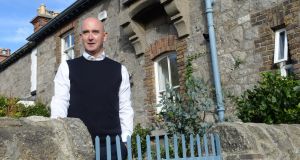 When it comes to searching for our dream home, “stunning sea views” or “sweeping mountain vistas” would probably rank highly in a range of criteria. “Overlooked by a container yard” would presumably be quite low on the list of selling points. But that’s where interiors designer Gregory Curran calls home – an old coastguard station in Ringsend, in the heart of a busy section of Dublin’s docklands.

As I pull up to the house, giant gantries loom across the road, moving large containers around from cargo ship to truck and back again.

The house itself is an imposing grey structure at the end of a gravel path and the thick granite cut-stone walls help to keep out much of the noise of industry going on nearby.

There’s a small tower atop the roof; this, says Curran, is an old lookout tower now converted into a home office.

At first glance it looks as if the property extends all the way down the street, but it actually comprises the two-storey house which Curran shares with his husband Ronan MacMuiris, plus a row of small cottages, with their own entrances around the back.

“It was originally a barracks, built around 1860, and all the houses were connected,” Curran says. “It’s a protected structure and when we were getting the renovation work done, a friend of ours, Róisín Hanley, a conservation architect, gave us a hand dealing with Dublin City Council. We had to do research on the building and, because it had been converted into a coastguard house, we were able to prove that the use of the building had changed which was to our benefit.”

Also to the couple’s benefit was the utilitarian nature of the house. Inside, it is simple and unadorned with few outward signs of its Victorian origins. It’s all sharp angles and blocky surfaces – no fancy ceiling coving or centre-roses to be seen.

“All the angles, that’s what I like about it. And the fact that everything is very plain. Usually a house from that period would be very ornate but because this was utilitarian, it doesn’t have all that flowery stuff.”

The couple bought the house in 201 2, but it was another 18 months before they could actually move in.

“It had been in the same family for 40 years, and both parents had gone into nursing homes. The house had bad rising damp – we had to take up all the floors,” says Curran.

“It was the first house we looked at and we fell in love with it. But we were slightly daunted by the amount of work it was going to take.”

With help from a friend, structural engineer Niamh O’Reilly, the project was brought in only slightly above budget – luckily there were no nasty surprises, and it didn’t end up being a money pit.

“The structural engineers thought there might be some subsidence. The house had sunk, because it was built on sand, but that was 150 years ago, and it’s not going anywhere.”

The livingroom retains its 1920s fireplace, although the door adjoining the terraced cottages has been removed. The room is tastefully decorated with a vintage Knoll couch in American walnut, and a birch ply sideboard made by Irish architect Sam Stephenson.

The dining room to the front of the house was originally an ammunition store. “Allegedly, it was raided for arms during the War of Independence,” says Ronan. “The house was a military structure, so it would have been a target in those days.”

The room is now a space for entertaining, with a high ceiling and a small staircase rising to. . . nowhere. “We closed it off to keep out draughts – part of the planning is that we had to keep the stairs, so we decided to make it a feature of the room,” says Curran.

“We didn’t alter the layout all that much. There’s only two of us. Anything we could keep we did keep. The doors are all original. Some of the door handles we had to change. And some of the architraves. It’s the perfect space for two people – not too big and not too small.”

We head upstairs to the first floor, and then on up a narrow staircase to the lookout, and emerge into an impressive eyrie which in its day would have had commanding views of the Liffey and Dublin Bay. The views have been somewhat obscured by the container yard and Dublin Port, but are still impressive.

Since Covid-19 the couple have had to work mostly from home, which is not a problem. Ronan – an accountant for the food industry – has set up office in the former lookout tower, while Curran divides his working day between – pandemic restrictions permitting – his office in Blackrock, meeting clients, and using the kitchen table. It’s a cosy spot that’s conducive to creativity and – more importantly – close to the coffee-pot.

The garden is a fine, private space and since the pandemic hit, Curran has been spending a lot more time there.

“We entertain a lot at home, so that’s something we miss. We also entertain in the garden during the summer – it’s south facing, so it gets the sun. Even when it’s overcast, it still feels warm.”

To the side of the house is a boathouse where the coastguard would originally have stored their craft. “We’ve gone for planning, with the aim of doubling it in size,” says Curran. “My friend Gráinne Webber, who I share the office in Blackrock with, is handling the planning application. It’s a protected structure, so we’ll retain the boathouse as one big room, and the kitchen and bathroom and everything else will be an extension.”

The result will be the ultimate granny flat. “We may end up living there ourselves,” laughs Curran.

Furniture favourite: Sideboard unit made by Sam Stephenson in the 1980s.

“In my 20s, between school and college, I worked in Kilkenny Design in London. The shop closed down around 1987 as it wasn’t making any money, and the whole store was going to be ripped out. I was renting a flat in Hampstead so I actually took that unit home with me in a black cab. It’s gone with me everywhere. It’s a bit battered but very practical and minimal. It’s birch ply. And the handle part is walnut.”

“I went to college with Tom, in Dún Laoghaire College of Art and Design [now IADT]. He did fine art and I did design. He’s based in Austria now. Back 10 or 15 years ago, I did a Lotto quick pick and won €1,100. So I thought, instead of just paying off my credit card bill, I’d invest it. So I bought this piece by him. I’m glad I did – because the money would have been just gone, while now I have this.”

“That clock was in my grandparents’ house in Whitehall [in Dublin]. So when they died we were all asked if we wanted to take something. So I took that. It’s kind of quirky. I would have seen it as a kid and I always liked it. It’s from either the 1930s or 1950s and still works.”