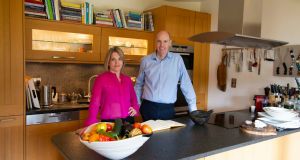 Ken Madden and Beth-Ann Smith of Lismore Food Company in the kitchen with their book of hand-written recipes. Picture: Patrick Browne

The house that Beth-Ann Smith and Ken Madden share is full of laughter, no small amount of intriguing gins, and plenty of biscuits. The kitchen is also currently home to a number of jars of chutney. “You never know what you’re going to end up with a glut of,” explains Smith.

She gestures towards the kitchen garden beyond the large windows, which provides an abundance of fruits, vegetables, herbs and some spicy chilli plants. All have been coming in handy lately, as Madden and Smith have been busily recipe testing for their Lismore Food Company’s newest range, which adds jams, chutneys, chocolates, vinegars and cordials to the already famous biscuits.

“It’s exciting getting to the starting line,” says Madden, showing me the vivid orange hatboxes that serve as hampers for the new goodies. There’s a theatricality to them, which shouldn’t come as a surprise given Madden’s background – he trained at RADA, London’s prestigious drama school, and worked in theatre production in the West End before returning to Ireland to be, for a while, an estate agent, until the lure of food pulled him back in.

I’m visiting during that period when it was briefly normal to go to other people’s houses, and I’m beguiled by an inner hallway full of black and white photographs of film and theatre types. Martin McDonagh looks moody alongside more colourful family snaps.

“Food goes way back in my family,” Madden says. The Summerhouse, the Lismore Food Company’s base in (where else?) Lismore, was a pub and a bakery back in the 1800s. Now it’s a charming cafe with biscuit-making facilities out the back, but the real work of tasting and testing happens in Madden and Smith’s kitchen at home.

Smith is a foodie through and through. A graduate of the Ballymaloe Cookery School, she worked as head chef at Lismore Castle, cooking for the Devonshire family and their guests in the huge kitchens in the castle basement – “Cinderella stuff”, as she describes it. When she met Madden, she had been living in a cottage in Lismore that seems to have continued the Cinderella theme. “It was a really damp old house, with ice on the inside of the windows in winter. I was getting sick all the time. Ken said: ‘What would you want in a house?’ which was his way of asking me to move in together,” she says with her infectious laugh.

When times are hard, people revert to comfort where they can

And who could resist such an offer? His time as an estate agent had given Madden a good working knowledge of the houses in the area, but that dream home – plenty of space, lovely light, a good kitchen, close to the town, yet in the Co Waterford countryside, and with a sizeable garden – was that little bit elusive.

The house the couple finally settled for had been available to rent, as the owners were living abroad. But, proving once again that if you follow your passion, and your nose, things tend to work out for the best, Madden and Smith moved in, and two years ago, after they had been living there with Smith’s son, Harry, for five years, the owners agreed to sell.

The couple met simply by dint of living in Lismore, which is the kind of place where everyone gets to know everyone soon enough.

“I was always obsessed with food, arts and culture, and pretty soon we were throwing ideas around,” recalls Smith.

“We started at the Summerhouse,” continues Madden. “Working with my brother Owen, we spent half a year having a biscuit-off, which also involved a lot of get-fit classes as we were scoffing biscuits constantly.”

“The Three Biscuiteers,” as Madden describes them, rose to the occasion and it all came together. The distinctive gold circle branding was inspired by a Patrick Scott print, the original of which hangs in the couple’s living room, alongside works by many other leading Irish artists, and a fabulous wall piece made from 24 individually framed maps of London, which Madden created as a birthday present for Smith. “They came from a book, and I just framed them,” Madden says modestly, as I plan to steal the idea.

The original biscuit range was launched in 2014 and quickly took off, despite the country only just starting to emerge from recession. Orders came flooding in.

“When times are hard, people revert to comfort where they can,” Madden muses. Expansion meant the biscuiteers were working in separate spaces, but lockdown brought Madden and Smith home again. “Ken works from the mezzanine,” says Smith wryly, showing me a balcony study area. “While I stand obediently below.”

We laugh at the idea of that, before turning to explore the rest of the house. “We didn’t do much,” says Smith. “They [the original owners] had done a really great job building it, so we just added a stove, and filled it with our stuff adding art and colour.”

“It was an incredibly easy move,” says Madden, although I suspect he’s the kind of person who finds things easy because he is so organised. Smith concurs. “He’s much more organised than I am. He said ‘if we just throw out stuff every week’. He came with one car-load – I had so many more. But we hung up our paintings and put the books up, and everything seemed to slot in. It felt like home straight away. I also love the light. Even on the darkest days, you get the most beautiful light here. We have such long winters, it’s so lovely to have.”

Once settled, Smith and Madden planted the kitchen garden, and began to experiment again, to sow the delicious seeds of their new range.

“We get inspired by many things, including whatever we have a glut of,” says Madden. “And some favourite ingredients. I love cacao nibs at the moment. Everything starts here,” he continues, gesturing to the kitchen.

“Often things happen by chance. You can be making a sauce and think, wow that’s an amazing taste, but you have to be able to reproduce it, and scale it up. And it has to be able to travel. We made an amazing pecan biscuit that just wouldn’t travel. Beth-Ann has a talent for ingredients, for the balance of flavours,” he adds.

I’d have a marble surface if I could. It’s much better for doing pastry

“It’s a gorgeous kitchen” says Smith. “Bright and fresh, but it is small, we’d love it to be twice the size, but we also like the separation from the sitting room, so we wouldn’t knock through. Still, we’re often jostling for position at the counter. Ken is a tall chap. He needs more space, I can just about squeeze in.”

She laughs again. So even though they clearly enjoy the squeeze, what would their absolute dream kitchen contain?

“Space, a good work surface, a really quick dishwasher and room for your knives,” says Smith immediately. “Oh, and the right oven and hob. I love gas. We have an induction here, and I have come round to it – it’s slower to respond, but much cleaner.”

“A high quality weighing scales for baking,” adds Madden. “It’s really important when you’re scaling up. You might be using three grams of something, but if you’re planning to make 10 times the amount later, you really need to be accurate.”

“I love this work surface,” says Smith, the kitchen clearly being an inspiring subject for them. “It is very beautiful – unpolished granite. But I’d have a marble surface if I could. It’s much better for doing pastry as it stays cold. Polished granite would do too. You want something cold and flat.”

I consider how this kitchen – too small, with the wrong surface and hob – clearly makes Madden and Smith so happy, and I realise that they’re one of those couples blessed with an ability to make good, wherever they find themselves.

I leave, clutching chillies, chutney and a fresh desire to pickle and preserve. I could never do it as well as these talented cooks, but you never know until you try. And if I fail? I can always order one of those lovely orange hatboxes.