The ‘For Sale’ sign has damaged the wall of our new home. Who is responsible? 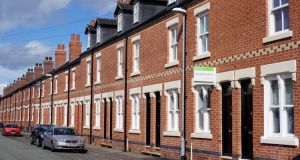 If the agent erected and took down the sign, their public liability insurance must include this activity on their policy. Photograph: iStock

We recently purchased a terraced house and requested the removal of the ‘For Sale’ sign. The estate agents sent someone to remove it and when we examined the wall of the house after it had been removed we discovered the wall had been badly damaged.

Is it the responsibility of the estate agent to repair the damage caused by the removal of their sign? Would you advise taking the matter further?

This would appear to be a legal question, but let’s examine the scenario.

You don’t specify whether the sign was on the actual front facade wall of the house, or on the front garden wall. Sign erectors should not, in my opinion, erect a sign on the front facade of a house if this is likely to cause damage. However, there are many “flag” signs on terraced houses that front onto public pathways. If erected properly by an experienced sign erector with the correct level of public liability insurance, then any damage while seldom, should be covered, provided the sign erector erects AND takes down the sign. The estate agent would have a copy of the sign erector’s current public liability Insurance when renewed annually.

If on the other hand the agent erected and took down the sign, their public liability insurance must include this activity on their policy.

I had a case recently where our sign erector felt that the front garden wall did not appear strong enough to support a sign, particularly in windy conditions, and there was nowhere else to put the sign. The front facade of the house was not an option because the facade would inevitably be damaged. The vendors did not want a sign in their window, so we decided, in the interest of safety, not to erect a sign at all.

Proof of damage caused by the sign could be determined by examining the photos of the front of the house online and brochure showing that the damage relates to the positioning of the sign.

Assuming then, that the sign did cause significant damage, you could, in the first instance contact the estate agent about your concerns, then the agent would contact their sign erector who would have their insurer’s assessor inspect the damage. Either way, I would expect that this should be covered by the sign erector’s insurance and the wall restored to its former glory.

Roger Berkeley is a chartered estate agent and member of the Society of Chartered Surveyors Ireland, scsi.ie