Rare piece of heaven in inspiring Wicklow setting for €2.35m 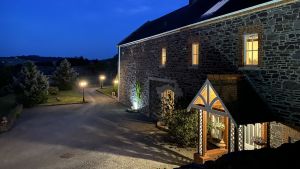 Dripping with history and cultural credentials, the Glanmore Estate in Ashford, Co Wicklow, was once home to famous playwright John Millington Synge. Synge liked to head to the Aran Islands to conjure up his gritty dramas about Irish peasant life, but perhaps that’s because Glanmore itself is more salubrious than raw. Still, the area is deeply inspiring.

Seamus Heaney moved to Glanmore with his family in the 1970s, renting a cottage, which he later bought as a writing and family retreat. The cottage is celebrated in the poet’s Glanmore Sonnets, and the empress of Japan visited him there. Find the entrance to Glanmore Hall just after a stone cottage and drive past paddocks and up a rise, to the atmospheric 389sq m (4,187sq ft) 19th century four-bedroom home.

Glanmore Castle itself, now divided into separate apartments, is hidden across the fields, and David Ashmore, who is handling the sale for Sotheby’s (at a guide of €2.35 million), says that through his researches he imagines the Hall must have originally been a Victorian model farm. Built in to a fold in the 4.45ha (11-acre) grounds, the house itself is a beautiful conversion, first done in the early 1990s and refurbished and upgraded again in 2015. It is wonderfully finished, to such a high standard that Julia Roberts briefly rented it as her home while filming in Ireland.

Downstairs, a charming entrance hall with a rich hardwood floor leads to the kitchen and family room, and an elegant dining room; but the real drama is the double-height banqueting hall, overlooked by a minstrels balcony. But don’t let that put you off if you’re not the type to hold epic banquets serenaded by minstrels, the current owner, a music producer, has the area laid out as a relaxing sitting room. Meanwhile, the minstrels balcony operates as a home-working space. Framed discs here are a testament to the owner’s ’s music successes.

The four bedrooms are all upstairs. The main bedroom is en suite with a walk-in wardrobe and dressing room. This had originally been a fifth bedroom and could be again. Because of the slope of the land, the main bedroom also has French windows, leading to a patio, and giving views across the paddocks and mature gardens.

Ashmore also points to the attic space, which at an additional 74sq m (800sq ft) has conversion potential. “It would be an easy conversion, because of the split level access,” he says. There is further potential outside, where there is a collection of outbuildings. These include two stables, and additional spaces in a separate yard. The stables are ready for occupation by lucky horses, but the other buildings need stronger intervention, including re-roofing to make them workable.

One of the nicest features is the courtyard that opens off the house, which is accessed through French windows from the kitchen. This is enclosed by old stone walls and is a perfect sun trap. A lovely covered veranda with a barbeque area, and a separate laundry room complete the enclosure.

The location is another strong selling point. It’s just half an hour from Dublin, and yet amid some very beautiful countryside. As the owner, who has lived there for12 years, says: “The house is captivating, the views are breathtaking, the privacy unmatched. To be able to walk or take your horses from your door into a forest with waterfalls every day is why Glanmore is a rare piece of heaven so close to Dublin.”

Or why not take the words of Seamus Heaney, on coming home to Glanmore: “Often when I’m on my own in the car, driving down from Dublin to Wicklow in spring or early summer – or indeed at any time of the year – I get this sudden joy from the sheer fact of the mountains to my right and the sea to my left, the flow of the farmland, the sweep of the road, the lift of the sky.”