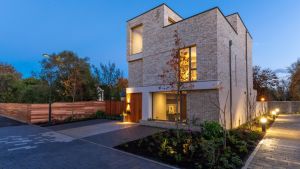 Sandymount offers a seductive mix of urban and coastal life within walking distance of the city centre. The heart of the village is set around a green where Carolyn Mulholland’s bust of Seamus Heaney surveys the community at rest and play. But the area’s added ingredient is its proximity to the vast stretch of seafront bookended by the Poolbeg towers and the piers and spires of Dún Laoghaire.

Replete with an abundance of period properties, new homes in this part of Dublin 4 are rare.

Monterey is an infill site by Richmond Homes, and built in the rear garden of number 11 Park Avenue, it is situated mere minutes from the green. The nine-unit scheme, on a 1.34 acre site purchased for €4.1 million in 2018, has been designed by ODAA O’Donoghue & Associates Architects, headed by Darrell O’Donoghue, formerly a partner at ODOS Architects. It is the practice’s first multi-unit scheme, and the result is gloriously nuanced in finish and form.

The homes exude a sense of light and space – and also boast an impressive A1 Ber rating. “We put a lot of time into the details. We were on site constantly finessing, to amend, revise and edit, as the build progressed,” O’Donoghue says.

The energy-efficient element has been addressed with full-fill cavity insulation, floor-to-ceiling triple glazing by Cortizo, and flat roofs covered in sedum providing greenery from every window. In addition to air-to-water, heat pump-operated underfloor heating and mechanical ventilation, the practice worked with a thermal modeller to forensically examine every part of the build to eliminate cold bridging, O’Donoghue explains.

The result: houses with a lovely flow to their layout that feel very liveable, whatever your decor style.  The finish is subtle enough to allow would-be owners the pleasure of putting their own stamp on the properties – the fun part of house hunting.

Demand is brisk, says Ray Palmer-Smith, director of new homes at selling agent Knight Frank, adding that one in four of the interested parties pre-launch has comprised expats looking for a base in Dublin. And buyers are not just talking the talk, with four of the nine semi- and detached properties already sold. These ranged in price from €1.695 million to €1.995 million.

Richmond Homes closes the year having sold out its scheme of 25 four-bed homes at Castle Vernon in Clontarf and another of  16 four-beds  at Ashfield Place in Templeogue.

The buff yellow-brick buildings at Monterey have champagne-coloured render and a modernist look. Each opens into a hall where a triple-height, self-cleaning light well brings daylight into the centre of the house. A solid oak staircase with shadow gap detailing, by Moore O’Gorman, rises to the first floor.

The showhouse, which was completed by Róisín Lafferty’s Kingston Lafferty, is full of clever ideas that add discreet colour and texture.

For example, in the living room, to the front of the house the use of timber reeding on an entire wall and its double doors conceals those openings to dial down visual clutter in the room, a simple but effective way to create a really stylish space. While this detail isn’t standard, the reeding also helps with sound dampening.

The rear of the house is home to an L-shaped kitchen/dining/living area washed in light from three different planes. Sliding doors that open out to the silver granite paved patio can be opened from either end to better facilitate furniture arrangements depending on the best aspect for the sun.

The kitchen, by McNally Living, is customisable with three different palettes from which to choose. It features quartz countertops, a four-ring induction hob with under-counter extractor by Bora and Miele appliances. These include luxury extras such as warming drawer and a family-friendly full-height fridge with separate under-counter freezer.  There is a separate utility room, where Miele white goods form part of the package.

Lafferty is a great proponent of colour theory. The exterior wall, where the dining and living areas are located, has been painted a dark anthracite. This bold choice may seem counter-intuitive in such a light-filled space, but it prevents the light bouncing off walls and blinding occupants.

Not a centimetre of space is wasted in the bathrooms. They feature large-format tiles by Pamesa Ceramica, supplied by Waterloo. Other sleek elements are the wet-room style showers that come with clever, fold-back-on-themselves shower doors by Irish company Merlyn that provide more floor space, particularly useful when bathing small kids in the family bathroom.

The bedrooms have plenty of storage in banks of wardrobes by BeSpace, recessed to sit flush with the wall they are minimally intrusive.