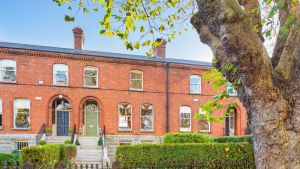 Dartmouth Square – between Upper Leeson Street and Ranelagh Road – is lined with redbrick Victorian terraces of two-storey over-basement properties surrounding a beautifully maintained and well-used public park. The city centre is a short stroll away.

Number 56, on the south side of the square, last changed hands in 2008 when the current owners moved in. Four children later they are moving on having updated the house twice – first when they bought and then just three years ago when they undertook a major extension and refurbishment.

It had been a student rental when they purchased and so the first tranche of work included a new kitchen at garden level and updated bathrooms as well as general decoration. The house at that time was a five-bed but they knocked through two rooms to give the main bedroom a dressing area – with custom-built mahogany units – and a spacious en suite. Walnut parquet salvaged from a conversion in the UK was sourced to replace the draughty old floorboards in the hall and reception rooms.

Nearly 10 years later when they decided to extend, they knew what they wanted and the work brought the house to 242sq m/2,615sq ft. They had found themselves spending most of their time in the two interconnecting and typically grand reception rooms off the hall – not the norm in these type of houses and impractical with small children – because the layout at garden level wasn’t working for them.

Visits to neighbouring houses on the square gave them ideas; the owner notes that in the years since they bought more and more young families have moved into the square, most reworking the space at garden level.

The big decision is always where to put the kitchen. A more traditional approach is to put the kitchen to the front with a sink at the window to watch the world go by. More recently, the trend has been to put it in the middle, open plan to a living space that opens to the garden; or, as in this house, to put the kitchen at the rear so the original room to the front – here used as a playroom – can be closed off leaving a further living area at the foot of the stairs between it and the kitchen.

“We wanted to take full advantage of the south-facing aspect,” says the owner. For the two-storey extension, they dug down to give extra height in the kitchen area – fitted with bespoke timber painted units by Shalford Interiors – but also to ensure that the rear glazed doors open directly out to the garden.

“We wanted the kitchen and the garden to be on the same level, no steps up or down because it’s better with small children and you tend to use it more.”

The staircase coming down from hall level is separated from the open-plan area with a glazed wall that adds a stylish modern touch. Flooring throughout is grey oiled herringbone parquet oak. The garden is covered in mud-free Astroturf.

In the space under the granite steps leading up to the front door, a guest toilet has been installed.

The four bedrooms are three doubles and a good single – the latter in the extended hall floor return, an area also fitted with a wall of storage where the laundry is located. In these houses where a fourth bedroom is not needed, this room in the return is often used as a study.

When they bought, there was a double garage at the end of the garden opening to Dartmouth Lane. They applied for planning permission to convert it into 33sq m/355sq ft of living accommodation with one bedroom, a living room, kitchen and shower room and since 2017 it been used for guest accommodation. New owners might use it as living accommodation for an au pair, an adult child or a home office.

Unlike many Victorian squares, the railinged front gardens remain mostly intact and number 56, like its neighbours, is set well back from the road, smartly landscaped with box hedging.

Readers familiar with Ann Enright’s latest novel Actress will know that it features a house in Dartmouth Square, home to a faded Irish actress who once had great success in the US. Perhaps its location is in homage to number 56 which was, according to the owner, once the home of one of the inventors of the Hollywood Irishman, Barry FitzGerald, who had been born William Joseph Shields in Portobello.