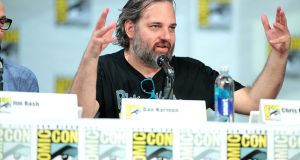 Dan Harmon, the creator of Community and Rick and Morty, and host of the Harmontown podcast, has deleted his Twitter account and apologised after video emerged of a graphic 2009 sketch in which he plays a therapist who repeatedly molests babies.

The sketch, Daryl, was the first of a two-part satire of the Showtime series Dexter, which has a man who kills murderers as its complicated hero. Daryl first aired in 2009 during the live monthly LA short film festival Channel 101, which Harmon co-founded in 2003.

The independent festival offers “total creative freedom” to those who make submissions. The festival, which specialises in short-form comedy pilots, which get voted on by the audience, has been known to air taboo or offensive content in the past.

The website Vulture reported that the video had been removed from the site without reason by 2012. It began to go viral this weekend after it resurfaced on the web forum 4Chan and was then shared by far-right subreddit The_Donald. One 4Chan user justified sharing the video created by Harmon – who has been a vocal critic of the US president, Donald Trump – as retribution for the downfall of Roseanne Barr: “If they get to take scalps for someone making racist jokes, we get to take scalps for them making paedophilia joke.”

Introducing the skit to camera, Harmon jokingly calls it “a little groundbreaking for normal people to handle – but maybe you’ll surprise me”. In Daryl, Harmon plays a therapist treating a new father. Harmon prescribes his client sleeping pills, before climbing through his window, taking down his pants, crawling on top of his client’s baby – represented by a plastic doll – and miming rubbing his genitals on or raping the baby, as the baby cries.

Later in the five-minute episode, Harmon’s character convinces another father that raping his baby will cure it of becoming a murderer. He caresses the naked doll, before taking off his pants and miming raping the baby on a couch. The skit ends with the promise that Harmon’s character will find more babies to molest.

On Tuesday, Harmon said in a statement the content was “way too distasteful”.

“In 2009, I made a ‘pilot’ which strove to parody the series Dexter and only succeeded in offending. I quickly realised the content was way too distasteful and took the video down immediately. Nobody should ever have to see what you saw and for that, I sincerely apologise.”

Adult Swim, who broadcast Rick and Morty, said Harmon had recognised his mistake.

“The offensive content of Dan’s 2009 video that recently surfaced demonstrates poor judgment and does not reflect the type of content we seek out. Dan recognised his mistake at the time and has apologised. He understands there is no place for this type of content here at Adult Swim.”

Harmon’s Twitter account, which had more than 670,000 followers, was deleted soon after the video began to go viral.

The controversy has drawn comparisons with the case of James Gunn, the Guardians of the Galaxy director who was fired by Disney last weekend after old tweets from 2008 and 2009 resurfaced, in which he joked about paedophilia, 9/11, rape and the Holocaust.

“My words of nearly a decade ago were, at the time, totally failed and unfortunate efforts to be provocative,” Gunn said in a statement. “I have regretted them for many years since . . . they don’t reflect the person I am today or have been for some time.”

On Monday, the comedian Trevor Noah responded to criticism about a racist joke about Indigenous Australians he made in 2013, footage of which also recently resurfaced. In the joke, Noah mocked the appearance of Indigenous women before miming oral sex while making the sound of a didgeridoo.

In response to calls to boycott his Australian tour, he tweeted that he “vowed never to make a joke like that again”.

Earlier this year, Megan Ganz, a former writer on Harmon’s show Community, accused Harmon of inappropriate behaviour while working on the series.

Harmon apologised for “flirty, creepy” and “cowardly” behaviour, which turned “cruel” after after she rejected his advances. Ganz wrote on Twitter that she accepted his apology.

Harmon has been approached for comment via Netflix Australia, where Rick and Morty airs. – Guardian