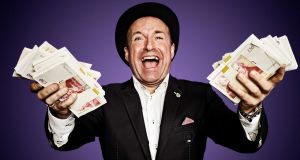 How to Get Rich Quick: the unexpected lessons of Dave Fishwick’s show are in the art of being extremely frugal. Photograph: Channel4

Meet Dave Fishwick, a man who knows how to get rich, but not, by the look of it, how to be rich.

“Ever wanted to know if you could get rich quick?” asks the self-made millionaire with the same rhetorical verve of a QVC salesperson enquiring into the sharpness of your kitchen knives. “I’m listening,” you calmly tell the television while carefully re-darning your socks.

The screen immediately cuts to Dave, in an immaculate blazer, ordering steak, pudding, chips, cheese and gravy at a stainless steel counter. The message is clear: follow the advice of his new financial makeover show carefully and all this could be yours. That, at least, is a more honest pitch than the title, because nobody gets rich quick in the first episode of How to Get Rich Quick. Instead, the series encourages people of modest means to pursue equally modest dreams in the very modest hopes, several weeks of hard work later, of doubling their modest investments.

Is a bowler hat and pinstripes – the logo of the show – an obvious emblem of extravagant wealth at a time when billionaires wear hoodies?

The initial candidate, for instance, is Tahira, a Pakistani-British council worker, with £1,000 to invest in Dave’s scheme, hoping to pay for her family’s home extension. Welcoming Dave into their home with a meal cooked by her mother, Amina, they await his entrepreneurial brainwave. “There’s a huge amount of profit in food,” he realises, like a goddam genius. His pitch: they open a food stall selling Amina’s cooking. “Can you hear it?” he adds to sweeten the deal. “Ka-ching!”

It is at this point that you begin to question Fishwick’s financial acumen. You may even find yourself scrutinising the production values of the show itself. Is a bowler hat and pinstripes – the logo of the show – an obvious emblem of extravagant wealth at a time when billionaires wear hoodies? Can a show that allows the camera to ogle every passing fast car in London be very acquainted with life in the fast line? And, shunting across the screen in a jaw-droppingly naff slideshow presentation, is Fishwick’s advice – “Know the competition. Look clean and professional” – actually worth a damn?

Following an investment of £1,240, and several weeks of hard work involving her entire family later, Tahira finally turns a profit: £1,015. “Giving her a profit of over a thousand pounds!” Fishwick enthuses wildly. Elsewhere, he brings a Warrington grandmother, Mags, along with him on a weekly investment, this week in gold, only to discover that the kilo they acquired, at £3,325, has depreciated in value by 7 per cent a few weeks later.

“I never said it would be easy,” says Dave, as another fast car turns the cameraman’s head. “Otherwise we’d all be rich.” Well, you can’t argue with that logic. It certainly would have made for a more honest title. Otherwise, the unexpected lesson of the show is in the art of being extremely frugal. For all the fast talk and surging promise, the whole thing looks as cheap as chips. Even with the steak, pudding, cheese and gravy.