Nine of the best TV shows to watch this week

Boy George tracks down his Irish roots in Who Do You Think You Are? while How to Get Rich Quick has money-making tips from businessman Dave Fishwick – creator of Bank of Dave 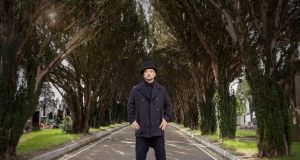 Boy George: his family tree reveals some interesting Irish branches on Who Do You Think You Are. Photograph: BBC

How to Get Rich Quick
Monday, C4, 8.30pm
Businessman Dave Fishwick – creator of Bank of Dave – attempts to teach people the money-making skills that helped him become a self-made millionaire, giving them the tools to make their money grow and double their investment pot in just a few months. In the first episode on this new series, he advises a council worker who wants to double her £1,000 savings by running food stalls in her spare time with the help of her mum and sisters, and introduces a pensioner from Warrington, to the world of financial investment.

Who Is America?
Monday, C4, 10pm
Some viewers may have wonder if the reason why Sacha Baron Cohen apparently moved away from the satirical shows and films that made his name is because he simply got too famous. In theory, after you’ve starred in an Oscar-nominated, worldwide box-office hit like Borat, even politicians who don’t normally keep up with cult comedy should start to recognise you. However, it turns out that we’ve underestimated Baron Cohen’s mastery of disguise. He’s spent the past year undercover and has managed to secure meetings with figures across the US political spectrum — including Sarah Palin, who claimed in an angry Facebook post that she had been ‘duped’ into an interview. So, don’t be surprised to see some big names being skewered in the second episode of his new series.

Home and Away Special: Endless Summer
Tuesday, RTÉ 2, 8.30pm
Home and Away has been going for 30 years – feel old? – but somehow everyone on the Aussie soap still look like they’re in their teens. The show is the anti-Corrie, where the sun always shines, everyone is young and tanned, and the entire town doesn’t hang out at the pub. To celebrate three decades of drama Down Under, this special programme brings former and current cast members together to reminisce about all the goings-on in the fictional community of Summer Bay. I have no idea what has actually been happening in Summer Bay for the past 30 years, but I’m sure it’s riveting. And I didn’t realise Dannii Minogue was in Home and Away, although I do know that she has a sister who was in another Aussie soap. I’m not a complete soap-thicko.

The Good Fight
Tuesday, RTÉ 2, 9.30pm
This spin-off from The Good Wife first aired in 2017, but it’s worth checking out again, thanks to a superb central performance from Christine Baranski as high-powered lawyer Diane Lockhart, whose plans to retire to a chateau in France are thrown into chaos after she loses all her savings in a financial scam. Baranski was a solid character in The Good Wife, ably supporting its star Julianna Margulies, but here she steps into the central role with confidence and class. Lockhart is a partner in the law firm of – deep breath – Lockhart, Deckler, Gussman, Lee, Lyman, Gilbert, Lurie, Kagan, Tanenbaum and Associates, but following the election of Donald Trump, Lockhart decides it’s time to get out of Dodge and plan her dream retirement. But when her financial advisor is arrested for an elaborate Ponzi scheme which wipes out her fortune, Diane is forced to go back into the legal business and try to restore her tarnished reputation.

Who Do You Think You Are?
Wednesday, BBC1, 9pm
Singer Boy George, whose real name is George O’Dowd, is proud of his Irish roots. The singer, who shot to fame with Culture Club in the 1980s, knows that his maternal grandmother was found wandering the streets of Dublin as a small child and put in a children’s home, and also heard that one of his great uncles was hanged in Dublin’s Mountjoy jail and is somehow connected to Kevin Barry, who was commemorated in an Irish rebel song. As he uncovers the grim details of what really happened to his grandmother and his great uncle, he also delights in a new sense of his family being truly part of Irish history.

Inventing the Impossible: The Big Life Fix
Thursday, BBC2, 8pm
If you’ve missed the previous runs of this fascinating and frequently moving series (when it was known as The Big Life Fix with Simon Reeve), it sees a team of inventors putting their skills at the disposal of people who want to overcome the obstacles between them and their dreams. In the first episode, they include 40-year-old Graham, who was a passionate snowboarder until an accident left him with limited use of his arms and legs. Although there are skis and snowboards available which have been adapted for the disabled, none of them can help Graham to stand upright and control a board independently again. Can award-winning engineer, Yusuf Muhammed, come up with a solution? The episode also meets Alexander, whose rare genetic disorder means he can’t expose his skin to the sun, and Kyle, whose dream of becoming a hair stylist is being hampered due to a problem with one of his hands.

Size Matters
Thursday, BBC4, 9pm
In the first of the two-part documentary, Hannah Fry asked what life would be like if Earth and its inhabitants were bigger. Now she’s looking at what would happen if everything was smaller, and discovers that if our planet shrank, we would all be suffering from altitude sickness – even at sea level. Then, as she looks at why shorter people live longer and small creatures seem to defy the laws of physics, she asks how humans would cope if we were just 5mm tall. We also discover why stars have to be a minimum size for fusion to take place.

Sick Note
Thursday, Sky One, 10pm
Season Two of the comedy of charades stars Harry Potter alumnus Rupert Grint as compulsive liar Daniel Glass, still pretending to have a terminal illness in order to reap the kindness and concern of those around him. Nick Frost stars as his doctor, who has been dragged into the deception and must help Daniel keep up the appearance of illness. But it’s getting harder to keep track of all the lies from season one, and Daniel’s online gaming buddy is threatening to let the sick cat out of the bag. Blackmail, crazed drug dealers and dogged cops are all part of the fun, and Lindsay Lohan joins the cast as the boss’s daughter. If this goes into several more seasons, it’ll be interesting to see how Daniel can keep convincing people he’s on death’s door.

Orange Is The New Black
Friday, Netflix
The Netflix drama has now gone into its sixth season, which means that Piper’s initial short prison sentence has now expanded into a zillion years. And there’s no prospect of her getting out of chokey anytime soon – the show has been renewed for a seventh season. Season five ended in a major prison riot, and now Piper and her fellow inmates have been sent to a new prison, and must get used to their new surroundings and new overseers. – Additional reporting: PA