My Broken Brain review: A portrait of people coping with the unimaginable 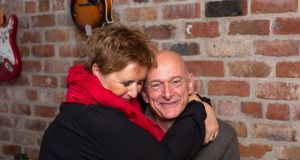 In less extraordinary conditions, it would seem insensitive to wake a man from a deep sleep, on his birthday, and ask him to identify a picture of a camel.

But that is what we see happening to Brian Byrne, a man suffering from worsening symptoms of epilepsy, as he undergoes an awake craniotomy. In short, he must be kept conscious as neurosurgeons delicately remove aberrant brain tissue to ensure they don’t remove something important – like his capacity to speak.

Brian is one of several people we meet during My Broken Brain (RTÉ One, Tuesday, 9.35pm), a documentary on neurological disorders and – where possible – their treatments, which is considerably more sensitive than its title suggests. The responses it provokes range from sympathy to squeamishness to abject hypochondria and a flitter of alternative titles: My Wrenched Heart, My Averted Gaze, My Next Check-up.

The programme’s participants are infinitely more stoic. “I just think that losing your mind is not something that’s easy to absorb or adapt to,” says theatre producer Ronan Smith, who has genetic Alzheimer’s Disease, a rare form of the condition. This, like his workoholism, he inherited from his father, who concealed his condition intent on “toughing it out”. That heartbreak helps to explain Ronan’s own generous transparency. The prevalence of Alzheimer’s in the population rises to between 40-50 per cent of those aged above 80, and Smith’s case is assisting the research.

When Billy Reilly, a family man and fit GAA enthusiast, woke up one day with a numb thumb and a sting in his arm, he thought, “Ah, it’ll fix itself.”

“But it didn’t,” he adds. Reilly was diagnosed, sometime later, with Motor Neuron Disease, a progressive and terminal condition. To say that we barely comprehend the brain, and for 700,000 people living with neurological ailments in Ireland, everything can go wrong with it, is one facet of the documentary. But Billy’s mind is something harder to fathom, facing a terminal condition with a staggeringly positive philosophy. “If everybody does their bit,” he says, when a moon-shoot drugs trial prove unsuccessful, “we’ll get it eventually.”

What emerges, then, is less a survey of neurological conditions than a portrait of people coping with unimaginable circumstances. Consider the resolve of Billy recording catchphrases and wisecracks for his family, in preparation for a time when he may no longer be able to say them. Or the bluff good humour of Brian’s wife, Michelle, following his complaints after intricate brain surgery: “Of course you have a pain in your head!” Or, as encouragingly, the relationships between patients and their specialists as they divine paths of treatment that are conventional, experimental and even folksy – like Cynthia Gardner, who persuades her disbelieving consultant that her Parkinson’s Disease symptoms quieten after a cigarette.

“You have to maintain the space for them to have their dignity,” says Miriam Brady, Ronan Smith’s wife. Like everyone here, that is how they confront the disease; as a real struggle, but a healthy one, to try and get our heads around it.