I emoji, therefore I am: getting with the Unicode programme

The Meming of Life: the rise of the emojis is causing humans no end of textistential angst 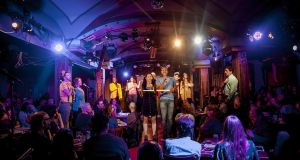 Emojiland: The Musical – getting a lot of smiley face responses

July 17th was World Emoji Day, a day on which the entire internet came together as one, to shrug, blink slowly and say with dignified resignation: “I suppose this is what we have to tweet about today.”

To many, emojis seem annoying, pointless and facile. But, just as previous generations balked at contracted speech or jazz slang, emojis are merely another form of communication seeking to express things our current vocabulary cannot. I mean, before the advent of these small, colourful Unicode symbols, how did we describe the sensation of feeling flamenco dancer nail polish taxi football alien?

In R’n’B, we’ve seen small, sensual moves toward emojis replacing the heartfelt love letter as a signifier of sexy feels

Originally the brainchild of Jeremy Burge – vice chair of the Unicode Emoji Subcommittee and, one presumes, the patron saint of people who have jobs which have permanently alienated them from their parents – World Emoji Day has been in existence since 2014 but really seemed to up a gear this year, reflecting the fact that emojis have begun to accrue in greater numbers in pop culture. Earlier this year, Atlanta rap-besties Migos commanded people to take emoji-themed neckwear in their song Emoji a Chain, while Future, Ghostface Killah and A$AP Ferg have all released their own emojis.

In R’n’B, we’ve seen small, sensual moves toward emojis replacing the heartfelt love letter as a signifier of sexy feels. When James Joyce wrote lusty missives to his beloved Nora, he spoke of a love that “blew across my soul like a wind of spices”. Gripped with a similar feeling on Text Message, Jamie Foxx sang: “LOL, smiley face, the emoji with the tongue out/ Now I’m kissing you, touching you, freaking you over at your house.”

On the big screen, the past year has already seen Sir Patrick Stewart star as a literal dollop of excrement in The Emoji Movie, a film so paralytically appalling it’s hard not to suspect that the entire enterprise was some sort of complicated tax dodge. But perhaps the most unexpected venue for emoji art has been theatre, which this week welcomed Emojiland: The Musical into its off-Broadway ranks. Billed as a “textistential new musical”, it concerns several emoji protagonists – including Skull, the nihilist – going through a software update. Although this sounds like pretty thin gruel, early reviews suggest it has more heart and nuance than you’d expect from a musical about an installation package.

All of which is good to hear, since the emoji is here to stay, and too much bad art around them risks devaluing the symbols such works claim to celebrate. It would be a sad, sad day after all, if sentiments like 👺 🤖 🎩 were to lose all their meaning.