Actor Roseanne Barr has posted videos on her YouTube channel explaining how voting for Donald Trump, not what was reported to be a racist tweet sent by her, led to her show being cancelled. Video: Roseanne Barr 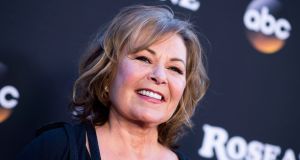 Actor and comedian Roseanne Barr has taken to YouTube to blast “the biased media”, saying that her public support for Donald Trump led to her being axed from her eponymous TV show.

The former star of Roseanne published two videos on her Youtube channel in response to the controversy generated by a tweet in which she compared one of Barack Obama’s former aides to an ape.

In the tweet, Barr referenced Valerie Jarrett saying “Muslim brotherhood & planet of the apes had a baby=vj”. The president of ABC Entertainment Channing Dungey labelled Barr’s comments as “abhorrent, repugnant and inconsistent with our values”. The network  had relaunched  Roseanne, Barr's blue-collar comedy, after 21 years off screen.

Last week, Barr announced on Twitter that she would no longer take part in television interviews as they were “too stressful and untrustworthy for me and my fans”.

The first video, published on July 19th, begins with Barr in the middle of a soundcheck. A male voice heard off camera starts to explain what presumably is to be the concept of the video. Barr is told to imagine a scenario in which a president becomes embroiled in a scandal with a hooker.

The voice states “imagine in his statement he can save his job. There were jump cuts, multiple outfits, different sets” – Barr who grows increasingly agitated throughout the video interjects – “ I’m trying to talk about Iran! I’m trying to talk about Valerie Jarrett wrote the Iran deal. That’s what my tweet was about. I thought the b**ch was white” referring to Ms Jarrett. She then breaks into a scream. “Goddamnit. I thought that b**ch was white”. Barr lets out a final expletive and takes a drag from the cigarette in her hand. A man can be heard laughing off camera.

In the second video, published the next day, she states she can now speak to “fellow and sister Americans without the filter of the biased media”.

Barr claims she pleaded with ABC to let her explain the tweet about Ms Jarrett. “I also said, and I’m willing to go on The View, Jimmy Kimmel or whatever other show you want me to go on and explain that to my audience”.

However, according to Barr, the network cancelled her show before any advertisers pulled out.  “Why, you ask? Well, the answer is simple: Because I voted for Donald Trump, and that is not allowed in Hollywood,” a fuming Barr concludes.

The videos had a mixed reception online with one poster saying: “this won’t get you back into people’s good graces. Just say I was wrong and move on.” Another supported Barr, saying “these drones don’t get comedy”.

Her videos on the controversy appear to be more negatively received than her non-political content. For example, her recent video ‘Tips from a Domestic Goddess’ got  generally positive reactions. In it, Barr displays how a woman can urinate successfully while standing upright. A dishevelled looking Barr hoists up her skirt and informs the viewer to go into the second position of ballet and thrust their pelvis forward.

Other recent videos include an eclectic mix of interviews and culinary tutorials, particularly on French toast.

Barr has always been vocal about her political views. In 2012, she was a presidential nominee for the California-based Peace and Freedom Party and is an active supporter of Mr Trump.

The comedian is known for her alignment with conspiracy theories and making controversial and sometimes racist remarks. In 2013, she referred to Mr Obama’s African-American national security adviser Susan Rice as “a man with big swinging ape balls”. She has pushed many of the Trump administration’s conspiracy theories including the “Pizzagate” – a smear against Hillary Clinton’s campaign manager John Podesta.

Since the controversy, ABC has commissioned a 10-episode spin-off of the Roseanne show under the title The Conners, which will have no involvement from Barr.