Podcast of the week: Bubble: a burst of brilliant, dystopian sci-fi satire 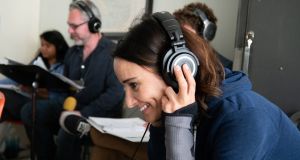 Alison Becker from Parks & Recreation stars as Morgan in Bubble

Bubble
Bubble is an eight-episode sitcom, set in the bustling city of Fairhaven in 2018 – just, very far away from where we are now. Fairhaven is shrouded by a bubble, protecting citizens from the monsters lurking in the bad wilderness outside. Most of the time. Unless you’re jogging in the park – which our protagonist, Morgan, is – and are interrupted by the sudden appearance of one, and have to murder it on site. That’s where the story starts.

This is a pulpy science fiction story with a millennial sensibility – there’s sarcastic narration and pacy, modern dialogue. There’s talk of lining up for brunch, and Postmates (the American Deliveroo) plays a pivotal role in the plot – and many of the gags. Tavi Gevinson’s narration is a little far north of Wes Anderson’s deadpan, but serves excellently as a transition between scenes.

Certainly some of the characters are obnoxious, speaking in chains of 2018 buzz-phrases, but this is intentional. The satire doesn’t feel cantankerous and there’s no sense of “Oh, you entitled kids with your Tinder and brunch” about it; rather, it is a stream of barbed in-jokes about living in 2018. The story doesn’t get lost in the ease of these jokes – it might let us, as listeners, forget for a second that we’re in a violent dystopia, but the story doesn’t forget for a second. Conversations weave between snipes about expensive artisanal cocktails and complaints about monster-blood being spilled onto a half-eaten hangover burrito. There is absolutely an adventure story behind the Broad City filter, and it’s a good one.

This first episode is an ensemble piece, but our hero is Morgan. Her journey as a child born outside the Bubble to her life inside is both at the periphery and heart of this episode. She’s something of a mercenary, due to the extra powers growing up outside the Bubble has granted her, and is taking up a new job working a gig (again, think Deliveroo) wherein she murders the monsters and imps of the city as something of a public service for the rest of Fairhaven. She doesn’t really have a choice.

In terms of the form, I will say that this does have a little bit of a feel of a table-read about it. The concept is excellent, the dialogue is whip-smart – but some of the performances are a little low-energy. The story would make an incredible film or television show too, and even the movement scene to scene suggests that we could be listening to a group of excellent comedy actors sitting around and blocking it out. It is such a fun, weird listen, but isn’t quite as immersive as I’d hoped. I’ll keep listening – and would recommend it wholeheartedly too for listeners who like a little Blade Runner with their artisanal handcrafted gunpowder gin cocktails.