Francis Brennan goes native – it’s fun, but from another era 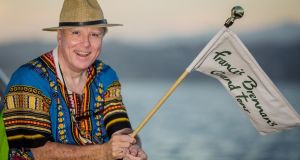 When Francis Brennan takes a holiday, even busmen take pity. The premise for Francis Brennan’s Grand Tour (RTÉ One, Sunday, 8.30pm), now in its fourth series, is that the effervescent and fastidious hotelier never stops, trading his camp hummingbird efficiency in hospitality at home, for a camp hummingbird efficiency in marshalling together a motley crew for a trip to a surprise destination. (Or as motley as any group inclined to share a holiday with a bunch of strangers and a camera crew can be.)

The prospect attracts voyagers who are unfussy, inherently sociable, certainly not retiring. So it isn’t altogether surprising that, in the first episode of his South African adventure, Brennan should encounter a younger version of himself. “South Africa, is it?” responds a 26-year-old Darren, from Cork, with familiar enthusiasm and élan.

Later, we will see him inspect his hotel room with a preliminary clean – “My biggest fear is dust” – as though auditioning for the next series of Brennan’s At Your Service.

If there’s anyone on the trip with a personality bigger than Brennan’s, though, they’ve yet to display it. Oh, sure, among the PAs, hotel workers, lovebirds, dog groomers and fantastically glamorous great-grandmother along for the ride, someone occasionally tries, like Patricia, who sprints into a hug at the first sight of Brennan and seems uproariously excited about everything that happens in his presence. But wouldn’t you be? Brennan is non-stop sass, with or without you. “Zebra crossing is right!” he tells a zebra crossing outside Dublin airport. Zing!

It takes the better part of a day to fly to South Africa, whereupon the guests are immediately launched into the ersatz tribal displays of Lesedi Cultural Village, a kind of theme park that Brennan imagines as Bunratty Castle, but with Zulus. “He knows it’s a bit cheesy and touristy,” says Colm O’Regan’s lightly ironic voice over, “but it’s a fun introduction to South Africa and Francis is blending right in.” This is because Francis, a man so white that even a sheet would offer him vitamin D supplements, is wearing a traditional dashiki.

The show is bewilderingly fond of jokey “going native” gestures such as this, the kind encouraged by cheesy tourism. Last year’s trip to Vietnam emblazoned the tour bus with an image of Francis in an Asian conical hat; this year’s it’s Francis in a kufi.

It’s all a bit of fun, the show might argue, but it’s the fun of another era.

Otherwise Brennan’s idea of a holiday is, like many people’s, a mingling of the tantalisingly exotic and the reassuringly familiar. A souvenir shop reminds him of Knock, of all places: “Deluxe rosary beads!” The converted shipping container homes in Johannesburg strike one visitor as a potential solution to the Irish housing crisis. And a visit to the Apartheid Museum encourages some sombre reflection. “You all know the separation of black and white,” Brennan instructs everyone briskly, by way of micro history lesson. (Indeed they do: Zebra crossing is wrong.) And though they cram 13 white people into a solitary confinement unit, much as they did earlier with a bockety elevator, the museum has an effect. As Moonlight Sonata plays gravely on the soundtrack, 83-year-old Frances can relate: “The English people had us under control for 800 years.”

No matter how far away you go, Francis Brennan’s holiday package understands, you never quite get away from it all.