The Patient Gloria review: Revisiting therapy as an exorcising scream 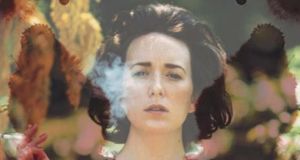 Peacock stage, Abbey Theatre
★ ★
In the second of her three counselling sessions, filmed for the 1965 educational movie Three Approaches to Psychotherapy, the patient, Gloria Szymanski, meets one staggeringly confrontational therapist. “You say that you’re scared,” the German practitioner of gestalt therapy, on a constant mission to undermine, says, “but you’re smiling.”

An enraged and justifiable response to the films, and all they symbolise, might be to laugh, however, as Gina Moxley’s coproduction with the Abbey, in association with Pan Pan, does. Folding a blunderbuss parody of male entitlement into a slightly surreal restaging of Gloria’s interviews, Moxley adds her own personal and political analysis: “Can you see me?” she asks first, like a woman accustomed to invisibility.

Even ironic penis envy, extolled at length, can seem like an impotent gesture, an effort to counter misogyny with gleeful misandry, fighting ire with ire. But when Moxley outlines a personal account of inculcated shame and unwanted exposure to male anatomy, from childhood onwards, such mocking gestures count as their own stage of therapy.

Another one, more generous to its source, is reframing Gloria’s sexual desire as a source not of anxiety but of power. In further ironic displays, the production’s director, John McIlduff, underscores Gloria’s libido, best conveyed in Liv O’Donoghue’s subversive, eruptive movements, with coyer cliches, like the sound of a roaring freight train or, at one giddy point, the sight of Moxley’s Rogers devoured whole between her legs – a pleasing spectacle, but entirely the wrong therapist.

What are we to make, though, of Zoe Ní Riordáin’s onstage guitarist, or another audience, credited as “Young Women of Ireland”, who gather to drink cosmos and listen raptly to Moxley’s recollections? Are they emblems of empowerment or just another deflating gag? Gloria herself, we understand, was engaged in a performance: “Believe half of what you see and none of what you hear,” she said. Revisiting her therapy as an exorcising scream may be diverting, but it doesn’t feel like a breakthrough.