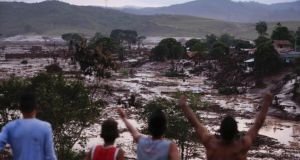 Mining Stories: Silke Huysmans and Hannes Dereere’s show about a dam collapse in Brazil in 2015 is thought-provoking and emotionally resonant

Project Cube
★ ★ ★ ★
As if a Portuguese-, Dutch- and English-language drama about a Brazilian mining disaster didn’t sound daunting enough, the fact that Silke Huysmans and Hannes Dereere’s show is a multimedia performance piece seems to set a forbidding seal on it. But the Brussels-based duo have produced a compelling slice of theatre in their treatment of the 2015 collapse of a dam in the state of Minas Gerais, with a spare but innovative staging that is both thought-provoking and emotionally resonant. As much stagehand as performer, Huysmans, who grew up near the dam, marshals a host of recordings and surtitles to recount the experiences of those hit by the catastrophic flood of toxic waste that followed the dam burst. But these fragmentary personal stories are interspersed with other voices that provide a broader context, from the realpolitik of the mining company’s power to ruminations on globalisation, resistance and the nature of memory. Such weighty subject matter could be portentous or penitential, but the material is handled adroitly to yield a show with an absorbing ebb and flow and a surprisingly light touch. It’s a timely show about being human in a world of global capitalism and capricious fate, without ever feeling like one: quite an accomplishment.