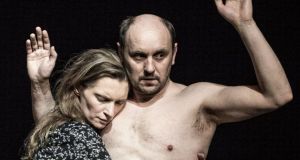 Project Arts Centre
★ ★ ★
On a bare stage, among a scattering of performers in rehearsal clothes, a tall blond man assumes the role of a white bear. With its detachable head, it’s the kind of costume you might see worn at an amusement park. “When you look carefully,” a wry voice says from the dark of the auditorium, “you can see the fur is fake.” So it is.

The director Anna Karasinska’s piece for TR Warszawa might best be described as a kind of inverse conjuring act: now you don’t see it, now you do. Everything within its playful, largely improvised hour requires an imaginative collaboration: through a microphone, Karasinska gives each of her six performers a character, a context, perhaps a secret; they respond with some fabulously minimal reactions (one actor’s periodic disrobing notwithstanding), and the audience projects the rest. “Switch,” Karasinska calls intermittently, and her amiable ensemble reposition on stage to begin a new tableau.

That may stiffen the impression of an extended theatre game, loose and limber, but against the vast and sumptuous spectacles of TR Warszawa’s previous visits, such as of its director Grzegorz Jarzyna’s Festen and Teoremat, it begins to look more pointed than frugal. When Jarzyna last appeared at the festival, with Jan Klata and Krystian Lupa, they represented, unironically, the “gods” of Polish theatre. Karasinska’s minimalism feels like a deliberate rejection: in the beginning there was nothing.

Does that also suggest a retreat from political engagement, at a time when theatre in Poland, under an increasingly autocratic regime, has become a vigorous flashpoint? Fantasia treads carefully, imagining among its sweet character studies and gentle absurdities the images of exploited labourers in faraway lands, murderers and their victims, anonymous suicides in China, suicide bombers and their families, bodies buried under allotment gardens – the sum of all guilts and fears, you might say, no less real to us because they are imagined. The deceptively simple invitation, then, is to see things differently. “Switch.”

Surviving Autocracy: an inventory of awfulness
9

Mike Skinner: ‘You can go too far with honesty’
10