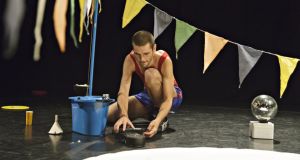 Samuel Beckett Theatre, Trinity College Dublin
★ ★ ★ ★
There is certainly a beginning to Louis Vanhaverbeke’s delightful exercise in creative torque. Indeed, there is the Beginning: speaking to a dance beat, the Dutch performer reads from a number of texts, Genesis among them, on the creation of life. There is certainly an end (maybe two): his final, elaborate construction takes us to one of our species’ greatest achievements.

What’s missing is a middle. That’s no accident. Taking on the persona of an endlessly inventive DJ – Heath Robinson of the old-school turntable – Vanhaverbeke offers us an evening of cycles, loops and whirring tori. When not running counterclockwise about a ring of junk, he invites us to worry about stunts that always seem three degrees too tricky for theatrical exhibition. He makes a pancake and then decorates it on yet another spinning LP. He inflates a globe while jogging. Pressing home the playful aspect of the enterprise, he transforms himself into Pamela Anderson and, to the strains of Survivor’s American Heartbeat, strides towards an unseen swimmer.

There may be serious purpose to all this, but Multiverse works best as a class of top-end street theatre. Neither the scruffiness of the props nor the broadness of the gags can distract from the staggering precision of Vanhaverbeke’s skills. Did I really hear the theme from Blake’s 7 in there?