A Portrait of the Artist as a Young Man review: Ingenious, exhilarating fun 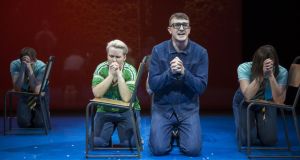 A Portrait of the Artist as a Young Man: Amy Conroy and Paul Mescal in Rough Magic’s production. Photograph: Ste Murray

A PORTRAIT OF THE ARTIST AS A YOUNG MAN

Pavilion Theatre, Dún Laoghaire
★ ★ ★ ★
“The personality of the artist refines itself out of existence,” argues Stephen 5, the fifth young Dedalus we meet in Arthur Riordan’s ingenious adaptation of James Joyce’s seminal autobiographical novel. In Ronan Phelan’s exhilarating, restless contemporary production, the emerging artist is brought to life through a relay of rotating narrators and reinvented Stephens.

As the energetic ensemble swap the bright-green jersey of the Italia ’90 soccer campaign between them, Riordan’s version of A Portrait of the Artist as a Young Man reaches out beyond the novel’s modernist origins to ensure Joyce’s coming-of-age tale is as relevant to conceptions of Irishness now as it was then. The hero’s constant rebirth in the shape of another actor thrusts us beyond the book’s national interests, however, revealing Stephen not just as an artist but as an Everyman.

Katie Davenport’s shiny plastic set offers reflective surfaces against which Sarah Jane Shiels’s lights shimmer and dance as we move from the various Dedalus homes to the educational institutions that inspire the hero’s intellectual journey. A giant faceless statue of the Virgin Mary looms over every scene, reinforcing the cold, impersonal hold that Catholicism has on Stephen, but it also emphasises its inevitable irrelevance. Davenport designed the costumes, too, and her denim suits offer a uniformity to the ensemble, enabling easy transformations from one character, and one Stephen, to the next.

Phelan crisply executes Riordan’s giddy text, puncturing the poignancy of Stephen’s epiphanies with artfully chosen pop songs. If the second half of the production is less entertaining, as dizzying action gives way to aesthetic arguments and the self-serious Stephen embraces his intellectual awakening, the let-down is, perhaps, inevitable. Even Joyce realised life itself was the best material for art: the novel he wrote after Portrait was Ulysses.

Riordan has created something fast-paced, fun and refreshingly unconventional from Joyce’s most earnest of writings, and every stroke of theatrical boldness is delivered with absolute joy. You may have read Portrait more times than you would like, but you will find something new in this brilliant production.

Runs at the Pavilion until October 7th, then touring to Portlaoise, Letterkenny, Longford, Waterford, Cork, Ennis, Galway and Tralee; roughmagic.ie