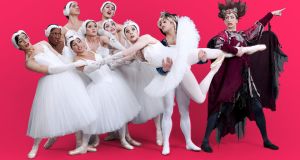 Hanging out with members of Les Ballets Trockadero de Monte Carlo, an all-male comedy ballet company, presents dichotomies at every turn. Onstage they fuse camp with classical reverence and physical machismo with effortless grace. Backstage they can talk brands of pointe shoes while putting on makeup in a football jersey and feathered headdress. Their discreet tattoos disappear beneath their white, ankle-length tutus, and when the curtain goes up, their performance evokes equal parts laughter and awe.

The “Trocks”, as they have affectionately been known since their start in the 1970s, have defied convention since they began performing Off-Off-Broadway. The impetus of the gay rights movement in the US helped bring the company together, and ever since the Trocks have remained committed to classical ballet with a comic twist. The current cadre of 18 men maintains an unswerving respect and healthy irreverence for their art, and though societal changes may have brought the Trocks more into the mainstream, their commitment to the classics has never wavered.

A typical evening with the Trocks involves excerpts from at least one well-known ballet. Their amusing renditions of Swan Lake Act II and Les Sylphides cemented their fame well before Billy Elliott or Matthew Bourne ever put on a tutu. As their audiences have grown to include not just ballet fanatics but also newcomers and families with children, the Trocks have expanded their repertoire. Still, their trademark foibles and faux pas can carry a show from solemn to lighthearted with the single swipe of an arm.

Artistic director Tory Dobrin provides a link between the group’s early history and its present-day touring schedule. He’s a one-time Trock now charting the company’s future. So much of the Trockaderos’ time is spent on the road – nearly 40 weeks per year, totalling more than 100 shows – that it operates as much like an extended family as it does an arts organisation. In the fiercely competitive world of ballet, the Trocks’ stable roster of dancers and impressive number of tour stops says as much about its leadership as it does its talent.

“When I hire someone I’m thinking about whether they’re someone you’d want to sit next to on a plane,” Dobrin explains, only half-jokingly, during an interval at the Trocks’ September run in London. “I don’t necessarily hold auditions, because with us it’s as much about how you can get along with everyone as it is how talented you are as a dancer. I can tell right away when someone walks into the studio whether they will fit in or not. They may be uptight, or arrogant, or they may not respect the others in the room. It’s more important that they’re able to get along in the group.”

Two hours backstage at London’s Peacock Theatre with the Trocks makes it clear Dobrin’s philosophy permeates the rest of the group. Dancer Robert Carter’s 23-year career rivals that of many ballerinas in terms of longevity. His ability to infuse comic drama into some of ballet’s best-loved classics, and do so en pointe, makes him the kind of busy artist many ballet organisations wouldn’t allow a journalist to spend 45 minutes with before a show. But Carter lets his large Starbucks coffee turn cold as we talk about the support he received early on that has helped him endure injury, surgery, long-distance relationships and defying stereotypes.

“Because I’m one of the older members and I’ve been around for a while, some of the others come to me for advice,” Carter says. “Throughout my career I’ve been lucky to have a great support system. My mother has always been supportive, and my father was too, eventually, before he died. I’ve been doing this for 23 years, and I’ve never ever worried about if I’m going to have a job or about paying the bills.”

Carter grew up in conservative Charleston, South Carolina, where dance lessons for boys were not necessarily encouraged. Yet his mother signed him up, his teachers recognised his talent, and Carter eventually found his home with the Trocks.

Dancer Jack Furlong experienced something similar after joining the company in 2014. His upbringing involved shuttling between New York and Co Leitrim, where his first introduction to ballet was sneaking off the football field to watch a dance class.

“The tradition in my family is for the second-born son to become a priest,” Furlong says. “My mom actually wanted me to become a doctor, so she definitely did not get her wish.”

Furlong considers Ireland his first home, and remembers his family’s initial reaction at seeing him onstage, dressed up as Guzella Verbitskaya, one of his stage personas. “After the show they said, ‘Can we talk to you about something? We really don’t know which one you were.’”

This kind of misidentification seems to thrill the men behind the makeup. Their innovative, over-the-top caricatures with hard-to-pronounce Russian names give a nod to the early 20th-century Russian touring ballet companies. Those travelling troupes (often with their own neverending names) brought ballets to audiences who otherwise might not have seen classical dance. They also built the careers of many famous ballerinas, on whom the Trocks base some of their interpretations.

While the Trocks may poke fun at ballet’s seriousness, they never criticise the art form itself, something which is a delicate balance to strike. “We recently had Karina Elver from Royal Danish Ballet in coaching Napoli,” Furlong explains. “It was difficult because I didn’t know much about performing in the Bournonville style.”

Rehearsals meant learning to perfect the Danish technique, with its lowered arm movements and effortless-looking footwork. The method downplays facial expressions, so preparing for Napoli required the Trocks to fine-tune their acting while keeping it subtle and fun. In addition, the men still needed the exceptional concentration and strength required when dancing en pointe. Most admit that having the right pair of shoes helps.

“I’m not very good at sewing, so I ask Ryan in wardrobe to sew the ribbons on my shoes for me,” Furlong says. “I pay him back in gin and tonics.” Another company dancer helps Furlong attach Duco cement and canvas to his pointe shoe tips to help prevent slipping.

In Furlong’s shared dressingroom the banter moves from opinions on Ireland’s abortion referendum to Furlong’s best friend who has a farm in Dunboyne where a cow is named Jackarina, after him. But just as easily as these dancers can joke, a levity takes over when one dancer reads from the newsfeed on his phone that the pioneering black dancer Arthur Mitchell has just died.

“He died an hour and a half ago,” says Josh Thake, pausing to put his makeup brush down after learning of Mitchell’s passing. Mitchell (84) was the first black ballet dancer to reach stardom with the New York City Ballet. He went on to pave the way for future generations of black dancers through a hard-earned career, and later founded the Dance Theatre of Harlem. Sitting in a room full of men who constantly confront stereotypes, Mitchell’s passing feels quite poignant.

As the final backstage calls sound through the loudspeaker, some dancers rummage for a different pair of shoes, while others adjust headdresses and do pliés to warm up. Wardrobe supervisor Ryan Hanson keeps a calm ambiance as various dancers filter through his department to be hooked into their costumes.

Playing up the moment of being noticed by a journalist while slinking into his costume of white tulle, Garcia announces: “Today I’m a fairy in the woods. My man is looking for me and he never finds me.” Then shifting his wings slightly, he adds: “Every night I dedicate the performance to someone. Sometimes it’s my mom. Tonight it’s Arthur Mitchell.”

During the interval Dobrin tries to explain whether a dancer’s larger-than-life personality, such as Garcia’s, automatically leads to an oversized persona onstage.

“They’re behind all that makeup and they have a wig on, so they’re a little wilder,” Dobrin laughs. “Haven’t you ever gone out on Halloween all dressed up? Your inhibition goes away. It makes you a little crazy.”

But beneath the characterisations are committed dancers who respect the tradition from whence they came and hope to keep it going. “We’ve established our street cred with the traditionalists,” Dobrin says, “and for those who don’t know much about ballet, we’re a good introduction. Still, we’re a niche – all-male comedy ballet – and we intend to keep going as long as we can.”