How do you turn ‘A Portrait of the Artist’ into a play? 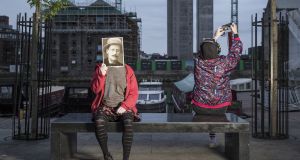 Sit in almost any part of Dublin, and you’re likely to find it has some association with Joyce. Photographs: Ste Murray

I’m sitting in a rehearsal room on Dublin’s Foley Street, watching the cast speak James Joyce’s words. Sit in almost any part of Dublin, and you’re likely to find it has some association with Joyce, but Foley Street has a particular resonance, being situated in the heart of what was Monto, the notorious brothel district which features heavily in A Portrait of the Artist as a Young Man, the book I’ve adapted for the stage. It’s mid-morning, I’ve just arrived, and Ronan Phelan, the director, has rehearsals well under way. To be honest, it takes a little while for me to work out which bit of the play I’m watching, because although Ronan is being entirely faithful to my script, he’s also been introducing some pretty bold directorial touches.

As I take my seat, Peter Corboy is passionately serenading a radiant, seemingly oblivious Martha Breen; Paul Mescal approaches Aoibheann McCann and they dance together with a sublime teenage awkwardness, which still isn’t half as awkward as the dance now being embarked on by Karen McCartney and Kieran Roche. Now Martha is dancing with Conor O’Riordan, and Peter’s singing takes on a wounded, bitter tone, while Amy Conroy looks on, throwing in comments, engaged with the scene but standing apart from it. The song Peter sings is anachronistic but it strikes me as being perfect for this moment in the play, which I’ve identified by now: a party in Harold’s Cross which is briefly referred to in the book, but in Ronan’s hands has become a full production number. Like many of Ronan’s directorial choices, it’s surprising but also surprisingly apt.

I’ve been dropping into rehearsals occasionally, but more for my own enjoyment than out of any desire to take notes or make changes. My contribution is already made, and I’m more than happy to hand it over to this immensely talented team. It’s important that at some stage the playwright lets go of the work, and trusts the performers to take ownership. Still, I drop in, because a rehearsal room is a great, energising place to be, especially when you’re not the one sweating over characterisation and blocking, and lines. Lines that many of the audience are likely to know, and be listening out for.

Portrait is at once a universal story about the adventure of growing up, and a very specific one about an artist finding his vocation (the term for which – Künstlerroman – I’ve recently learned and intend to overuse until I’m forcibly stopped). It’s a much-loved, ground-breaking work familiar to many readers in Ireland and abroad, many of whom have a favourite scene, passage or phrase. This presents particular challenges for anyone attempting to adapt it.

Adapting a novel for the stage involves a lot of selection, and a little bit of invention. You pick out the passages and scenes that are essential to the telling of the story, then you try and find ways to make them work on stage, and hopefully make them relevant to today’s audience. In Portrait, the transition from page to stage can be achieved very easily in the case of, say, the famous Christmas dinner scene, which is inherently dramatic, and mostly composed of dialogue, and while the encyclopaedically gruesome hellfire sermon may not have the same visceral relevance it might have had for Irish Catholics in the early twentieth century, it’s still a magnificently theatrical piece (though rest assured it doesn’t run to the twenty-odd pages it takes up in the book!)

On the other hand, the many fluid, episodic, virtually dialogue-free passages in the novel require a little more invention. For much of the book, Stephen is quiet and watchful, soaking in experiences, assessing his world, surrendering himself to various passions and compulsions, all in relative silence. Joyce often abruptly shifts us from one time and place to another in a manner that’s often described as cinematic, but can be a little problematic in theatre terms. I decided very early that a narrator was necessary to give voice to Stephen’s hectic inner life, and we worked on making the script and the action as fluid as possible, so that changes of scene don’t ever interrupt the flow. In the few places where it was necessary to write dialogue where Joyce hadn’t written any, I made little raids into Stephen Hero, Joyce’s earlier rendition of the same story, and occasionally turned to the one character in the Portrait who talks freely, and at great length, and in a very distinctive voice: Stephen’s father Simon. Simon is in some ways like a character from another type of novel altogether. He could easily pass for a grotesque out of Dickens or Thackeray: funny, feckless, frustrating and always verbose, so he was recruited once or twice when exposition was necessary. In the book, Simon also gives me cause for a certain amount of perverse pride: Joyce’s father attended St Colman’s College in Fermoy. I went to the Christian Brothers’ school in the same town. So when Simon Dedalus talks disparagingly of the Brothers, and “Paddy Stink and Mickey Mud”, I always like to think he’s referring specifically to my old alma mater!

Because the book is more conventional than, say, Ulysses, it’s easy to forget the stylistic innovations, the bold experiments in style and structure that Joyce carried off in his first novel. Ronan and I are determined that the story shouldn’t be presented as a period piece. The aim is to stay true to the story, and to the strange beauty of the language, but also to bring to the stage some of Joyce’s sense of adventure, his edginess, and most of all, his playfulness. That Harold’s Cross party scene seems like a step in the right direction.
Rough Magic’s world premiere of a new stage adaptation by Arthur Riordan, of James Joyce’s A Portrait of the Artist as a Young Man runs at Pavilion Theatre, Dún Laoghaire, (Sept 26-October 7), then tours nationwide until November 3rd roughmagic.ie