Samhlú 2020: Imagining a magical world of performance and creativity 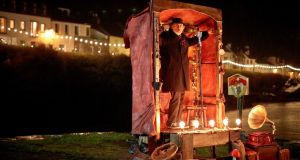 In Roundstone, Co Galway, on a week of wild November nights looking out at the Atlantic, on the small streets and down to the pier at the edge of the world, an abundance of creative people gathered to make some magic to share.

Two months earlier, at the end of September, TG4 and Creative Ireland had a callout looking for pitches for a TV show to celebrate how art and creativity have endured despite this challenging year.

And so it came to pass that Meangadh Fíbín, part of the drama and puppetry company Fíbín, shot Samhlú (“Imagine”) in late November, with a rough cut in hand before the end of the month. On Tuesday, December 15th it will erupt onscreen into what’s already looking like a joyous and surreal 90 minutes of gorgeousity.

Samhlú was planned with pandemic restrictions in mind, but Level 5 added new challenges. Writer-director Philip Doherty says “the vision was always to do it outdoors in a community. It was one of those shoots where the energy and atmosphere and synergy were all really nice. It was a magical thing to film, with a wonderful crew and artistic team, in beautiful Roundstone. The only thing was, it rained perpetually for one solid week. Ironically, the one time it didn’t rain was when we were shooting the single indoor scene.”

It’s got a pantomime structure, with music and spoken word. I’m treating it like a film, because the preparations were like for a film

So the misty atmospherics in the film may not be all an effect.

“The rain doesn’t really show up unless you backlight it,” which they did for an exhilarating dance scene on the pier, a group of young asylum seekers choreographed by Catherine Young, backlit by car headlights.

The 90-minute work is a sort of anthology film, a TV show not in a studio nor presenter-led, but an imagined world for the audience to escape into, with an over-abundance of performance and a loose narrative-ish structure. Doherty says: “It’s got a pantomime structure, with music and spoken word. I’m treating it like a film, because the preparations were like for a film. A film for TV celebrating the arts.”

His framing device is “to have this wanderer, a mythical character, this journeyman, the Tommy Tiernan character, wander into a village looking for magic. The village is a sort of metaphor for Ireland. He has this cart that transforms into a stage and shines light on all the creativity and art that happened this year, that didn’t happen in concert halls or theatres and in festivals. But did happen in private, behind closed doors in rooms, in people’s houses, within communities. He’s a sort of ringmaster for events and performances erupting in every corner of the community.”

Members of the choir Tonnta walk “out of their doors onto the street and burst into song”. Down on the pier is a chip van, where Julie Feeney serves up impossibly beautiful chips and her beautiful vocals. There’s sean-nós dancing on the street, and in upstairs windows on the street, David Geaney from Dingle and Ronan Kelly from Roscommon dance to Moxie’s Irish fusion music. From mummers to punk to harmonies. Slow Moving Clouds to a luibín (“almost like a traditional Irish rap” says Doherty) by Peadar Cox. There’s Shane Hennessy, Rónán Ó Snodaigh, Varo, Brian Finnegan, Séamus Flaherty, an eclectic mix of musicians and bands chosen with musical director Liz Doherty.

Philip Doherty describes visual styles that influenced him, from early Coen Brothers films (“I just love the worlds they create”) to vintage Galway Arts Festival posters by Joe Boske. He sees Samhlú as a cross between Fellini’s Amarcord, Richard Linklater’s Slacker and Jools Holland. The structure of La Ronde – the play and the film – waltzing from scene to scene across society was also inspirational. “It seemed to work for this because of the dreamlike, loose narrative with the wanderer character bringing us from scene to scene.”

I just I didn’t see anyone else in the part. Tommy is the seanchaí of Ireland, the wandering poet and storyteller

Doherty says, “I’m from a town [Cavan] myself and I love the idea of it being populated by these larger-than-life characters and celebrating all the performances that happen naturally every day.”

Tommy Tiernan makes a great Old Man of the Roads, like a Beckett tramp with a great blas, pulling a cart-cum-pop-up-small-stage, clip-clopping his way through the dark streets, coming upon performances, hoping tonight the town they will share its magic.

It was written with Tiernan in mind. “I just I didn’t see anyone else in the part. He is the seanchaí of Ireland, the wandering poet and storyteller.”

He worked hard on the Irish, says Doherty. Tiernan himself observes: “Níl mórán Gaeilge agam, so I had to take lessons. So I’m here le cúnamh Peadar Cox. I’ve had an interest for a long time in doing something as Gaeilge. Táim i mo chónaí in mBearna [west of Galway city] and this just came out of the blue. One of those fluent situations where I was free, the work came up, I liked the script and I’ve really enjoyed working with Peadar on my blas.”

Interwoven into the narrative are six short films exploring aspects of the performances, “kind of like Russian dolls, behind the scenes of the making, then back out into the world of the film”: Waterford Walls murals by Mia Mullarkey; Modern Day Mummers by Johnny Gogan; Catherine Young’s dance by Jonny White; Paul D’Eath on making Fíbín’s drive-in drama Fiach in Connemara during Covid; Pat Comer’s film about Traveller culture Lackeen; and music film Éire ildánach by Allyn Quigley, with music by Daithí Ó Drónaí.

It feels like an arena, when you’re walking around it, the walkway from the old pier to the long pier, and then the streets

Tania Banotti, director of Creative Ireland (in the Department of Tourism, Culture, Arts, Gaeltacht, Sport and Media) says “the practical objective of the commission was work for artists, and to show the public what’s happening outside of ticketed events. It ended up being much more. Samhlú is a wonderful celebration of the richness of artists working bilingually. TG4 rose to our challenge of presenting everything from mummers and graffiti artists to traditional music, theatre and multicultural dance.”

The programme’s finale pulls it all together like a collage, including Morgan Bulloch dancing (on screen from the US, not on the street) and performances of a premiere of a new piece of music by Riverdance composer Bill Whelan (who lives in Roundstone, and in whose studio much of Samhlú’s music was recorded).

Roundstone itself is also a starring character. Doherty “wanted a village that stepped out onto water, into a harbour. I just love the beauty of that and the festoons hitting the water. Paris is the city of light and Roundstone was transformed into a village of light.”

He fell in love with the village and its architecture, “these coloured houses, right on top of each other. It feels like an arena, when you’re walking around it, the walkway from the old pier to the long pier, and then the streets. An arena, confined into that area where all the performances happened, like a spinning top. I just knew straight away that this is the place I could see the performances erupt.”

Samhlú 2020 airs on TG4 on Tuesday, December 15th at 9.30pm. Following that, Samhlú Croí Cruthaitheach, broadcast from January 6th, is a selection of new abstract short-form documentary films featuring artists and creatives from all over Ireland, exploring the influences on Irish creative work.