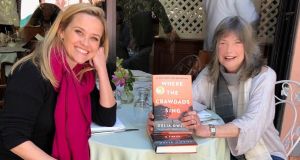 Where the Crawdads Sing, by Delia Owens, a crime thriller that is also a coming-of-age tale, is set to be Ireland’s bestselling book of 2020.

The debut novel, which has sold more than eight million copies worldwide since the actor Reese Witherspoon selected it for her book club, has sold 55,039 copies in Ireland to the end of November, almost 7,000 more than its nearest rival, according to figures released by Nielsen BookScan, which compiles the publishing industry’s official charts.

It is the story of Kya, who is abandoned by her family and grows up alone on a marsh in North Carolina. She becomes a respected nature writer but is accused of murdering her former boyfriend, the local golden boy. Witherspoon is to coproduce the film version, which has been adapted by Oscar-nominated Lucy Alibar (Beasts of the Southern Wild) and will star Normal People’s Daisy Edgar-Jones.

In second place is a book that started life as a series of Instagram posts. The Boy, the Mole, the Fox and the Horse, an illustrated book with inspirational messages by the artist Charlie Mackesy, has 48,149 sales. It is also the most lucrative book of the year, with sales worth €634,033.

Unusually, 2020’s top three bestsellers were all published last year. The highest-ranking 2020 book, and also the bestselling nonfiction title, is Champagne Football: John Delaney and the Betrayal of Irish Football, by Mark Tighe and Paul Rowan, recently voted Irish Sports Book of the Year, with 27,228 sales.

Jeanine Cummins’s novel American Dirt was at the centre of a storm over alleged cultural appropriation when first published at the start of the year, but it did not affect sales. It is in fifth place, with 25,964 sales.

Next is The Daly Dish, by the married couple Gina and Karol Daly, another book that started life on Instagram. Between them they have 120,000 followers for their recipes with the magic ingredients of being tasty and slimming. Now they have converted this into 25,871 sales, generating almost €500,000.

Two Irish authors who have managed to combine literary acclaim and bestselling status are next, Marian Keyes with Grown Ups and Graham Norton’s Home Stretch, followed by The Silent Patient by Alex Michaelides, the year’s most popular thriller to date.

Marie Cassidy’s Beyond the Tape: The Life and Many Deaths of a State Pathologist is next, the bestselling memoir of the year so far, more than 6,000 copies ahead of Here’s the Story by former president Mary McAleese.

Old Ireland in Colour by John Breslin and Sarah-Anne Buckley is another huge hit. The practice of colourising black and white photographs is as controversial in its way as cultural appropriation but there is no doubting its popularity, racking up 18,598 sales but also well over €400,000 as it retails at €22.99, meaning it is on course to be one of the five top-earning titles of the year.

Slime by David Walliams is the year’s bestselling children’s title, with 18,032 sales in 15th place, and is likely to climb as Christmas approaches. His The World’s Worst Parents also makes the top 20.

Shuggie Bain by Douglas Stuart, this year’s Booker winner, does not feature in the top 100 Irish titles but last year’s joint winner Bernardine Evaristo makes the top 20 with 17,596 sales.

A strong showing by crime writers – The Thursday Murder Club by Richard Osman, Our Little Cruelties by Liz Nugent and The Guest List by Lucy Foley – round off the top 20.

Other Irish titles to sell more than 10,000 copies were The Hungry Road by Marita Conlon-McKenna; Trisha’s Transformation: Beat the Bulge and Still Indulge! by Trisha Lewis; Braywatch by Ross O’Carroll Kelly; A Light That Never Goes Out by the late Keelin Shanley; and The Liberation of Brigid Dunne by Patricia Scanlan.

The Boy, the Mole, the Fox and the Horse is the bestselling title in Britain this year, followed by Pinch of Nom Everyday Light, Where the Crawdads Sing, The Thursday Murder Club and Slime.

Sally Rooney’s Normal People comes in ninth and Conversations with Friends is 86th. The only other Irish authors in the top 200 are Marian Keyes (95th); Noel Fitzpatrick with How Animals Saved my Life (163rd); Adrian McKinty for The Chain (186th) and Steve Cavanagh for Fifty-Fifty (188th).