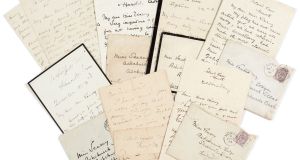 The WB Yeats letters that are up for auction

A series of seven unpublished letters by the teenage WB Yeats will go on sale at Sotheby’s in London next week.

The letters contain the first reference by Yeats to the veteran Fenian John O’Leary, whom he would immortalise in his poem September 1913: “Romantic Ireland’s dead and gone; it’s with O’Leary in the grave.”

The letters were written between 1883 and 1886. Six are to Ethel Veasey and the other is to her brother Cyril Veasey, who was Yeats’s friend at Godolphin School in London.

Very few letters from the young WB Yeats exist. Only four in the Collected Letters Volume I, 1865-95 (1986), date from before 1887. The letters span the time when Yeats, then 18, was trying to get his first poems published and to be noticed.

In the first letter, written soon after Cyril had departed for a career in India, Yeats writes of his love for natural history, an enthusiasm shared with the Veasey family, and recommends the writer Grant Allen (“his books have an essence like smells of the fields”).

He also responds to a question from Ethel about his writing, admitting that he was writing poetry but “none that I am at all satisfied with”.

He writes excitedly to her about having his first work, The Island of Statues, published in the Dublin University Review in 1885. “The blue stockings of Dublin have been so good as to approve of the ‘Island of Statues’. I am very grateful to them and try hard to think them the shepherdesses of our modern arcadia but they have heads like withered apples and hearts like bitter almonds.”

The letters continue after the Yeats family moves from Howth to live in at 10 Ashfield Terrace, Harold’s Cross. Already, Yeats had become immersed in the social life of Dublin. “We go to literary evenings ... at the houses of the ‘King of the Orangemen’ and the ‘head centre of the Fenians’ – so you see we are not bigoted...”

There are echoes of one of his earliest and most famous poems, The Lake Isle of Innisfree, when he writes to Ethel about an “acre of green wood filled with the hum of insects”.

In April 1884 he discusses Time and the Witch Vivien, his earliest verse drama, at some length, giving a summary of the plot as well as an explanation of its origin at a Christmas fancy dress ball. “I finished it yesterday I begin today a new play I am also in the middle of a prose romance called The Island of many flowers.”

Yeats scholars will be interested in his descriptions of the author Katharine Tynan (“a writer of exquisite religious poetry”) and CH Oldham, the editor of the Dublin Literary Review, who is said by some to be a political radical “up to the lips in plots and away in his house on the slopes of the mountains. He entertains nihilists and other strange people.”

His encounter with O’Leary, who spent many years in jail for his activities, will be of most interest. He calls him “the famous Fenian, most gentle of rebels, most courteous of convicts”.