Patrick Freyne: Dolly Parton’s Christmas on the Square just has to be authentic. Surely 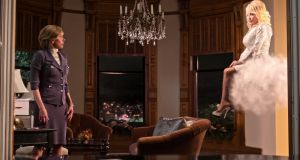 Currently there’s much tabloid handwringing about The Crown and its authenticity. I’ve not been keeping up with it, but I think some Tory ministers are concerned that Peter Morgan, its writer, doesn’t deal with how Queen Elizabeth chooses a host body or the ways in which she derives sustenance from the life force of orphans or the activities of her champion, the minotaur, in the labyrinth beneath Buckingham Palace.

But I don’t care about The Crown. I’m much more interested in whether Dolly Parton’s Christmas on the Square (Netflix) is authentic. I imagine in some ways it’s a documentary. The bit in which Dolly, in rhinestones and high heels, manifests while sitting on a cloud in Christine Baranski’s sitting room, for example. I think we can all accept that Dolly Parton (a) wears rhinestones and high heels, (b) can enter Christine Baranski’s sitting room uninvited, (c) controls the weather and thus cloud formation, and (d) travels atop a cloud. Look, the woman created the coronavirus vaccine and Jolene, for God’s sake; compared with that, the above seems pretty achievable.

I imagine this is how Dolly disguises herself when she walks among her people, who must pretend they don’t recognise her or she will, rightly, have them imprisoned in a big pink castle

Christmas on the Square opens in a Christmassy blizzard of pizzicato strings and ye olde paintings of snowy scenes. We arrive at a town square in which, in contravention of Trump’s famed Footloose laws, the denizens are singing and dancing about how much they like Christmas. Dolly Parton literally teleports in dressed as a tramp. This means that she looks like Dolly Parton in a shawl. She is fully made up, her hobo rags are well tailored and she sings about community spirit and caring. I imagine this is how Dolly disguises herself when she walks among her people and everyone must pretend they don’t recognise her or she will, quite rightly, have them imprisoned in a big pink castle.

Anyway, everyone here is pretty adept at pretending they don’t recognise Dolly Parton, and so they’re happily Christmassing things up by the time Christine Baranski arrives wearing dark glasses, leather gloves and a scowl like a boss. She is exactly the kind of woman sensible young people dream of marrying to help bankroll their failing stand-up comedy/art/music careers.

“Are you sure you want to serve eviction notices to the entire town right before Christmas?” says Baranski’s hapless assistant/chauffeur, who is secretly an angel. This is pretty deft storytelling that tells you exactly where you are plotwise. Scenes like this play out every day in constituency offices, except they use words like “optics”. And, much like within those offices, here too great visions must be compromised for the narrow horizons of small-minded locals. In this instance, Baranski is facilitating a plan to bulldoze the town, which she owns, in order to build a huge mall. We never even get to see a PowerPoint presentation because the townsfolk instantly start whingeing.

Dolly and her co-angel convince Baranski not to give into the small-minded townsfolk and to instead and follow her dreams of bulldozing the town, building a shopping mall and then living the rest of her days in splendid joyous isolation

An aside about the small town in the US television tradition: it’s a contested space politically, as you’ll know from the last American presidential election. Let me do a quick survey: there’s Stars Hollow in Gilmore Girls, a town of smug Democrat-voting hipsters; there’s Cicely in Northern Exposure, where a New York doctor is slowly won over to the rugged, frontierist attitudes of local Alaskan autocrats; there’s Paris in Emily in Paris, which viewers in the US believe to be just a weird American town where hipsters live; and then there’s the Smurf Village, a settlement of Belgian migrants in Phrygian hats overseen by a paternalistic religious leader antithetical to nearby business owners (Gargamel). I doubt they even vote, those little blue anarchists.

In this film, much like in It’s A Wonderful Life, Baranski’s assistant is secretly a trainee angel attempting to gain full angel status by meddling in Baranski’s life like the state or Facebook. Dolly is her boss, materialising sporadically upon this earthly plane to dispense wisdom or to sing, much as she does in real life. There’s also a preacher and his wife who are trying to have a baby via IVF, a sassy hair-salon owner flanked by a Greek chorus of camp salon assistants, a widowed bar owner and his wise child, and Baranski’s old beau, who runs a junk shop. He fancies himself a custodian of memory, to which I say, “You’re a junk collector, man. Own it.” I’ve tried the “I’m a custodian of memory” shtick myself, but apparently the DSM says I’m a hoarder.

Anyway, as you might expect, there’s a happy ending. Dolly and her co-angel convince Baranski not to give into the small-minded townsfolk and to instead “lean in” and follow her dreams of bulldozing the town, building a shopping mall and then living the rest of her days in splendid joyous isolation. They finish on a song called You Go Girl, on which Dolly and Baranski duet as the builders move in and everyone else leaves in a depressing convoy to become somebody else’s problem.

No matter who you are you can watch this and feel that Dolly is on your side, but also that you should be nice to your neighbours

I probably should have said “spoiler alert” before that last paragraph. Or should I? Because – ha ha! – that paragraph was in fact my own invention. What actually happens is the townsfolk form a workers’ collective, seize the means of production and abolish private property because no one should own a whole town. Frankly, this feels like a reasonable response to the unearned power of Baranski’s rentier class.

Okay, I also made that up. Actually, Dolly steers a course between the two outcomes. If you’ve listened to the excellent NPR podcast Dolly Parton’s America you’ll know that she has a knack of keeping everyone onside while being gently progressive and traditional at the same time. The townsfolk of Christmas on the Square are diverse, critical of sexual shame and tax cuts for the rich (there’s even a joke about it) but simultaneously deeply religious, middle American and suspicious of the out-of-town elite. No matter who you are you can watch this and feel that Dolly is on your side, but also that you should be nice to your neighbours.

Over the course of the show Baranski gets a potentially terminal medical diagnosis from an unprofessional doctor, has a conversation with the precocious bar child who then has an accident, thus inconveniencing everyone on Christmas Eve, and reminisces with her lost love amid his hovel of junk. But then the troublesome child recovers, and Baranski learns she is disease-free and also that a secret child she once gave up for adoption is the preacher himself. And there’s a bit where Dolly seemingly impregnates the preacher’s wife with magic glitter, which, in fairness, I fully believe is something Dolly Parton can do.

In the end, Baranski agrees not to sell the town and parks her career ambition to become part of this idyllic American utopia while continuing to own it. Hurray! Baranski begs forgiveness in church before a final singsong, over which Dolly Parton gazes benignly, much as I believe she gazes benignly upon us all.