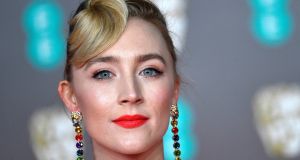 In at No. 10: Saoirse Ronan. Photograph: Neil Hall/EPA

The nation can relax. Saoirse Ronan has made it into the New York Times list of “the 25 greatest actors of the 21st century (so far)”. She is there at number 10 ahead of such giants as Catherine Deneuve, Joaquin Phoenix and (we’ll come back to this) Kim Min Hee.

Green passport holder Daniel Day-Lewis – who came second in The Irish Times recent chart of the 50 best Irish movie actors – is there at number three. Pull out the bunting. We are punching above our weight again.

The list is everything that such things should be. It is eccentric, awkward and surprising. “There’s no formula for choosing the best (just squabbling), and this list is both necessarily subjective and possibly scandalous in its omissions,” Manohla Dargis and AO Scott write in their introduction.

Nobody needs to see another parade of the usual suspects. The Gray Lady’s critics have done a good job of stretching beyond white America to include actors from all over the world. People of colour get their fair share. The authors have also allowed themselves at least one startling populist indulgence.

That said, no great risks are taken at the very top. Denzel Washington, a fine actor and a gleaming movie star for over 30 years, is the Times’s solid, uncontroversial top pick. Isabelle Huppert, a frequent choice for “best of her generation”, is an equally unsurprising runner up. Day-Lewis rattles no crockery with that number three spot.

After that, things get agreeably kooky. Keanu Reeves at number four? Why not? Like John Wayne, Reeves’s range barely stretches to a cinematic octave, but, as with that late veteran, he is always perfect in the appropriate role.

“Maybe you’re surprised to find Keanu Reeves so high on this list. But ask yourself: have you ever been disappointed when he showed up in a movie?” Scott reasonably asks.

Nicole Kidman outpaces contemporaries, and fellow 21st century Oscar winners, such as Kate Winslet, Marion Cotillard and Cate Blanchett – none anywhere in the list – to secure the last place in the top five. That is an odder choice than it may at first seem. Has The Hours really aged that well? She was eye-popping in Birth and The Paperboy, but almost nobody saw those films (maybe that’s the point).

Wandering beyond the oxygen-sparse heavens, we encounter three Asian actors. Zhao Tao, superb in the recent Ash is the Purest White, is there from China. Continuing the most fascinating cultural story of the era, it is, however, South Korea that takes up the other two places. Kim Min Hee, perhaps best known for Park Chan Wook’s The Handmaiden, and veteran Song Kang Ho, transcendent in Parasite, grab deserved spots. K-pop is capturing the mainstream. Parasite wins the best picture Oscar. That nation looks increasingly unstoppable.

What other inclusions stand out? The least well known of the American entries is probably Rob Morgan. Great in Mudbound and Just Mercy, the African-American character actor will never be short of work.

Catherine Deneueve, among the greatest stars in the medium’s history, is still holding up against younger competition. Melissa McCarthy, another unpretentious entry, is among the few remaining movie stars who can open a film.

Whether you agree with the choice or not, one glaring omission cannot be ignored. Despite 21 Oscar nominations (nobody else comes close) and three wins – one this century for The Iron Lady – Meryl Streep is nowhere to be found. She has been busy in the last two decades and, moving away from mopey sincerity, has revelled in a hitherto under-exploited gift for comedy. Listology is a cruel discipline.

Everyone reading this will be able to name another 25 actors who demand inclusion. From the home bench, Brendan Gleeson, invariably the best actor within any frame, deserves to be up there.

Olivia Colman probably hasn’t done enough cinema work to qualify, but Judi Dench, busier in her 70s and 80s on the big screen than she was in her 20s, has a right to feel left out. (The list’s focus on “working actors” explains why the late Philip Seymour Hoffman is not there.)

This writer’s picks might include Elisabeth Moss, Andrea Riseborough, Chiwetel Ejiofor and Florence Pugh. Or another 50 people I’ve forgotten. These pieces exist to stimulate such speculation.