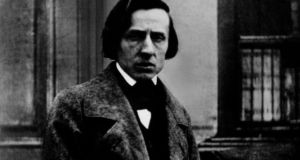 Frédéric Chopin’s archivists and biographers have for centuries turned a deliberate blind eye to the composer’s homoerotic letters in order to make the Polish national icon conform to conservative norms, it has been alleged.

Chopin’s Men, a two-hour radio programme that aired on Swiss public broadcaster SRF’s arts channel, argues that the composer’s letters have been at times deliberately mistranslated, rumours of affairs with women exaggerated, and hints at an apparent interest in “cottaging”, or looking for sexual partners in public toilets, simply ignored.

“You don’t like being kissed,” Chopin wrote to his school friend Tytus Woyciechowski in one of 22 letters. “Please allow me to do so today. You have to pay for the dirty dream I had about you last night.” Letters to the friend, who was actively involved in Poland’s January uprising of 1863, often start with “My dearest life” and end with: “Give me a kiss, dearest lover.”

Some letters fall just short of being sexually explicit. In July 1837, Chopin wrote to his friend Julian Fontana in Paris from London, reporting with excitement about “great urinals” with “nowhere to have a good tinkle”.

Chopin grew up in Warsaw but left the city aged 20 and never returned. Nevertheless, he remains a national icon in Poland, where several annual music festivals bear his name and the capital Warsaw’s main airport is also named after him.

The letters unearthed by Weber make for awkward listening in a country whose president, Andrzej Duda, has denounced the LGBT rights movement as an “ideology worse than communism”.

In an 1829 letter to Tytus Woyciechowski cited on the programme, Chopin refers to “my ideal, whom I faithfully serve, [...] about whom I dream”, and who inspired an adagio in his recent concerto. Weber argues that the context of the letter makes it clear that this “ideal” is the letter’s addressee himself.

Yet a translation of Chopin’s letters published in 2016 by Warsaw’s Fryderyk Chopin Institute assigns the “ideal” in the letter a feminine pronoun (“not having spoken to her for half a year now”) even though the Polish noun is masculine.

As recently as 2018, a Chopin biography by English-Canadian musicologist Alan Walker described Woyciechowski as a mere “bosom friend”.

The erotically charged letters addressed to a man, Walker writes in Fryderyk Chopin: A Life and Times, were the product of a “psychological confusion”, a “mental twist”, which made Chopin divert thoughts of sexual desire to his friend “that should more properly have been addressed to Konstancja [ Gładkowska]”, a Polish soprano with whom the composer has been described as having been infatuated.

But Weber says his research has found no concrete evidence of Chopin’s love for Gładkowska, or a supposed engagement to 16-year-old Maria Wodziñska. “These affairs were just rumours, based on flowery footnotes in biographies from the previous two centuries,” he told the Guardian in a phone interview. “Neither the Chopin Institute nor his biographers have been able to deliver any proof.”

A spokesperson for the Fryderyk Chopin Institute interviewed in the SRF programme conceded there was no evidence in writing of the composer’s infatuation with women, but only reports from family members.

“The way Chopin uses language is so musical and complicated, to translate all that is madness.”

When contacted about the specific translation of the 1829 letter, the translator David Frick said it was possible that Chopin was referring to Woyciechowski but rejected the accusation that the letters had been bowdlerised.

“He [Chopin] was a Romantic who definitely didn’t discriminate between men and women in his expressions of ‘love’,” said Frick, a retired professor in Slavic languages at Yale University. “But to say that there is some sort of conspiracy behind ‘missing’ letters in the various critical editions is absurd.

“The Institute is indeed a politically conservative organisation, but I didn’t find any bowdlerisation in the Polish edition, nor any ‘correction’ of my notes to passages where Chopin’s sexuality was concerned.”

Weber said he hoped his programme would encourage further study of how Chopin’s sexuality affected his music.

“The fact that Chopin had to hide part of his identity for a long time, as he himself writes in his letters, would have left a mark on his personality and his art,” said Weber. “Music allowed him to express himself fully, because piano music has the advantage of not containing any words.”

As Chopin himself put it in one of his letters to Woyciechowski: “I confide in the piano the things that I sometimes want to say to you.” – Guardian