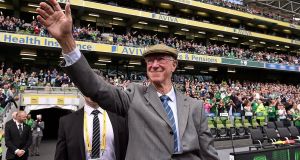 FINDING JACK CHARLTON ★★★★☆
Directed by Gabriel Clarke and Pete Thomas. Featuring Jack Charlton, Pat Charlton, Paul McGrath, Roddy Doyle, Eamon Dunphy, Brendan O’Carroll, Llarry Mullen. VOD, 97 min
Moving, touching, beautifully edited documentary on the life of a footballing legend. The directors have resisted all temptations to tread water with a charming film that bolsters the legend without giving in to hagiography. The elegant juxtapositions – Jack struggling with dementia in the years before his recent death, Jack as a footballer, Jack as a manager – take us to all corners, but his experiences with the Republic of Ireland dominate. It’s all here. The triumphs, the controversies and the Eamon Dunphy. DC

Bodily betrayals marry tech conspiracy theories in this unnerving second feature from Cronenberg. Tasya Vos (Riseborough) is the star employee at a shadowy company that uses body-possessing biotechnology to enact corporate assassinations. The cracks begin to show after a hit leaves a young possessed black woman gunned down by police. The striking red-drenched visuals, the jump-making score and spurting practical effects make this one of year’s most jarring viewing experiences. For the daring of mind, not the faint of heart. TB

Prepare the smelling salts. It seems the 565th version of Anna Sewell’s horse opera takes place in the contemporary United States. Black Beauty is now apparently a “mustang”. This is like reimagining Jemima Puddle-Duck as a rootin’ tootin’ gun-slingin’ fowl on the Oregon Trail. Right? Not really. If you can edge thoughts of sacrilege from your head, this new Black Beauty works well enough as a bank-holiday entertainment in the style of mid-20th century Disney television. Winslet voices the nag effectively. DC

Five years after the events of Yeon Sang-ho’s 2016 zombie hit, Chinese mobsters hire a crack team of Koreans to return to their apocalyptic home peninsula and retrieve a truck that may contain millions of dollars. It’s a poor idea made worse by survivors who leave the viewer yearning for the comparative polite society of Mad Max. Still, for anyone who hasn’t tired of zombie movies – or perhaps viruses – this pounds along as a glossy spectacle if nothing else. TB