Chris Messina: ‘Ireland is extraordinary; I could spend the rest of my life there’

Birds of Prey actor is a genuine nice guy, not of the disingenuous syndrome variety 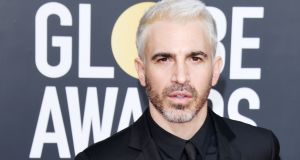 Chris Messina is a nice guy. Not of the disingenuous syndrome variety. But an actual, real world nice guy with nice things to say.  His sometime collaborator Mindy Kaling is “incredible and super-smart”; his Birds of Prey co-star Margot Robbie is “unique”; Ireland as a holiday destination is “extraordinary; I could spend the rest of my life there”; while the Abbey Theatre has “the greatest actors and the greatest plays.”

No wonder the 45-year-old has ended up playing so many, well, nice guys. He’s the voice of reason for Paul Dano’s Pygmalion-inspired author in Ruby Sparks. He’s Jennifer Aniston’s put-upon, exasperated ex-husband in Cake. He’s the saintly supportive spouse to Amy Adams’s cooking ambitions in Julie & Julia. Watching his cheating lover in Sam Smith’s I’m Not the Only One music video, one starts, against the run of the drama, to rationalise his actions. It can’t be Chris Messina’s fault, surely?

“I’m the guy that Rebecca Hall is going to marry in Vicky Cristina Barcelona,” offers Messina, helpfully. “But she really wants to be with Javier Bardem. I come from the New York Theatre scene. And early on, I got to play all these incredible characters. A lot of delinquents. A lot of gang leaders. A lot of drug addicts. Really amazing characters. But when I got to Los Angeles, I played a nice guy lawyer for the last season of Six Feet Under. My friends in New York were laughing at that but that was a very popular show and it kind of stuck. I’m very grateful to Alan Ball, but it was a blessing and a curse. Because Woody Allen and Nora Ephron and all these filmmakers decided I was a kind of schmuck nice guy. I have got to explore other kinds of characters in a lot of independent films. But they just weren’t seen in the way that something like Vicky Cristina Barcelona was. It’s taken me quite a while to convince people that I could do other things ”.

Despite the typecasting, Messina has charted a career that includes directing credits - his debut feature Alex of Venice, starring Mary Elizabeth Winstead and Don Johnson, premiered in 2015. He’s starred in an Oscar-winner (Ben Affleck’s Argo), two Nora Ephron films, worked a much-loved stint as Mindy Kalin’s OB/GYN rival and love interest on The Mindy Project, and did some serious walking and talking as a media president - and son of Jane Fonda - on Aaron Sorkin’s The Newsroom.

“The Newsroom, Damages, Mindy: they’re all hard to say goodbye to,” says Messina. “You care about all of them; you fight for all of them. And in life and in love and at work, you are always looking for your tribe and those were great tribes and educational experiences. I think The Newsroom was one of the hardest to walk away from because you had to say goodbye to that dialogue.”

Happily, Birds of Prey: And the Fantabulous Emancipation of One Harley Quinn has gifted Messina plenty of fun things to say, none of which falls under the trade description of nice guy.

“His elimination and extermination of people is, in his mind, for the greater good of the world,” says Messina. “He’s like a demented prophet. So I started to read stuff with that in mind. I started looking up cases where people claim that God made them do it or that they heard voices. People who didn’t have any empathy or remorse for the killings. They weren’t sorry. They were celebrating as if they’d accomplished something.”

McGregor has said that shooting the film was bonkers, and that “...every take was like a new experience.” Messina concurs.

“I’m dying to see it,” says the actor. “What we did on the film was really fun. The director Cathy let me do many different versions of Victor. So there was a subtle version, there was a real maniacal version, there was a fun version where he was comical at times. I’m not quite sure which version she went for in the movie. We took the idea of emancipation from the title and made it a freeing experience for us actors. But that’s what’s fun about comic book characters. There is a fanbase who are very devout and who have definite ideas. But there’s still room for anyone to put their own spin on it. It’s like Shakespeare. There’s always another way to do Hamlet.”

Birds of Prey leapfrogged over Suicide Squad 2 and Gotham City Sirens in terms of DCEU production order, when star and producer Margot Robbie secured the services of Asian-American filmmaker Cathy Yan after the director’s debut feature Dead Pigs made a splash at Sundance. Having languished for many years behind the Marvelverse at the box office, it’s a good time to be a DC fan. In keeping with Todd Phillips’ Joker and James Wan’s incoming Aquaman spinoff horror The Trench, Yan’s film is violent, sweary, and definitely R-rated.

“It’s a very unique DC film,” says Messina. “It’s a very fun ride. There’s lots of action. But it’s beautifully shot. A very dreamlike space. I’ve never read anything like the script, either in a comic book universe or anywhere else. I’m an actor. I love characters. I just want to walk out of a movie feeling an emotional attachment. So to get a character like this and motivation like this, but in a movie that’s crazy and ridiculous and fun, it’s a gift. I’m so lucky.”

It’s not unusual for Chris Messina to find himself, as with Birds of Prey, in the company of women. At a moment when many actors are scrambling to work with more diverse cast and crews, he has a resume characterised by women directors and creators. He’s just finished his second feature with Gia Coppola, and wrapped on Amy Seimetz’s (The Killing, The Girlfriend Experience) keenly awaited debut film.  He’s been married to Jennifer Todd, the president of Pearl Street Films, (Matt Damon and Ben Affleck’s production company) since 2007.

Growing up in Long Island, he learned to take direction from women early on. His mother Phyllis was a professional dancer and instructor and Chris initially hoped to follow in her footsteps.

“I wanted to be Baryshnikov,” he recalls. “But when I got into high school, we had an amazing English credit and we did all this improvisational theatre work about sex, drugs and rock and roll that was very progressive for a high school.

“But working on women-centric films has been by accident, you know? I’ve been blessed to be surrounded by great women my whole life: my mom and sister and grandmother. And I’ve been very fortunate to have great career opportunities alongside great women like Maindy Kaling and Margot Robbie. But I don’t go after something because it’s women centric. These just happen to be the people I admire and I really want to work with them.”

Birds of Prey: And the Fantabulous Emancipation of One Harley Quinn is released Feb 7th.

WHAT’S ON THE WAY FROM DC?

Everyone laughed at the “DC Expended Universe”. Then Wonder Woman was a hit. Before we had time to breathe, Aquaman registered as a genuine smash. Here’s what’s still to come.

WONDER WOMAN 1984
Just back up the truck and shovel in the loot. Nostalgic setting? More Gadot? It really can’t fail. Due: June 5th, 2020.

THE BATMAN
Robert Pattinson takes a break from indie mumblers and French puzzlers for Matt Reeves’s crack at the dark knight. Colin Farrell is the Penguin. Who’d blame either of them? Due: June 25th, 2021.

BLACK ADAM
Beats me. Apparently, the character was originally a villain from the Shazam! universe. Anyway, Jaume Collet-Serra directs Dwayne Johnson. So it should be fun. Due: December 22nd, 2021

SHAZAM! 2
Now we’re drifting into speculative territory. Sequel to the agreeable comic (as in funny on purpose) romp has David F Sandberg behind the megaphone again. Due: April 1st, 2022

THE FLASH
The film version of the DC’s answer to Billy Whizz has been on and off for years. Ezra Miller is, however, still down to star in an Andy Muschietti film. Due July 1st, 2022

COMONG NEXT...
Further down the line, Aquaman 2 and The Trench, a lower budgeted spin-off from the same subaquatic world, are in development. DC is also toying with the notion of a Bargirl flick.