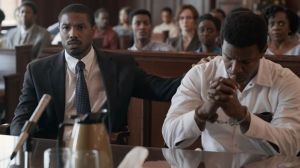 Why Just Mercy hasn’t featured more prominently within the greater awards conversation is baffling. Is it now considered anachronistic for a Hollywood picture to charge at racial and class injustice?

We may be about to lose director Destin Daniel Cretton to the Marvelverse – Shang-Chi and the Legend of the Ten Rings in 2021. Just for the moment, thankfully, the former care home worker and Short Term 12 director continues to make socially engaged drama.

Just Mercy is seldom technically dazzling beyond the level of performance, nor does astound with narrative tricks and inversions. But it is reassuringly, irresistibly, splendidly old-fashioned legal drama with a real world Atticus Finch at its centre – or perhaps more accurately, a modern day Amasa Coleman Lee, Harper Lee’s father and the inspiration for To Kill a Mockingbird.

It’s an apt and obvious comparison. Upon arriving in Monroeville, Alabama, every white resident seems to ask hotshot lawyer “from up North” Bryan Stevenson: “Have y’all been to the Harper Lee Museum?”

Just Mercy is commendably restrained in its courtroom scenes

Backed with a degree from Harvard, Stevenson (subtly played by Michael B Jordan) and social activist Eve (Brie Larson) have founded the Equal Justice Initiative is a nonprofit organisation that provides legal representation to prisoners who may have been wrongly convicted of crimes and guarantees the defence of anyone in Alabama in a death penalty case. At first, it’s a well-intentioned enterprise without an office or a hope. Even the law can’t prevent the prison guards from submitting Stevenson to a cavity search as he visits prospective clients.

Slowly, Stevenson earns the respect, or moreover annoyance of locals as he tackles convictions obtained without adequate legal representation. There is much muttering when he takes the case of Walter McMillian (Jamie Foxx), an African-American man wrongfully imprisoned for the 1986 murder of a white woman and sentenced to death. “I look like a man who could kill somebody,” an angry Walter explains. “You guilty from the moment you born.” He’s not wrong. A series of smug local lawyers and cosy judges suggest that little has changed since Boo Radley stood accused.

Based on Stevenson’s memoir, Just Mercy is commendably restrained in its courtroom scenes – there is none of the contempt-baiting wailing and gnashing of teeth that too often characterises legal procedurals. There are lovely supporting turns from O’Shea Jackson Jr as Walter’s death row inmate and Tim Blake Nelson as the informant who put him behind bars. Foxx does his best work in a decade. For the charismatic Jordan, who puts in a tone-setting nuanced turn here, Just Mercy arrives between Creed II and Tom Clancy’s Without Remorse. Let’s hope he sticks with the “one for them, one for me” formula.