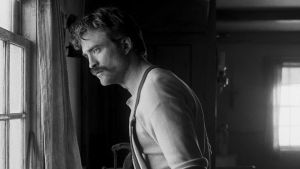 Robert Pattinson in The Lighthouse. Photograph: A24 Pictures

Following on from his film The Witch, Robert Eggers – working from a script co-written by his brother, Max Eggers – has created another distinctly American gothic to blur the line between deprivation and madness. As with the breakaway Puritans of its predecessor, The Lighthouse crackles with menace and a sense of isolation.

In the late 19th century, Ephraim Winslow (Robert Pattinson) is sent on a boat to serve as a wickie for four weeks on an isolated island off the coast of New England, under the supervision of the cantankerous Thomas, who works the younger man furiously.

Between hauling kerosene containers and emptying chamber pots, Ephraim masturbates over a tiny scrimshaw of a mermaid. Low-level resentment and bickering spills over into boozy violence and full-blown Oedipal shenanigans. Ephraim becomes increasingly plagued by visions and paranoia, skillfully teased out by Louise Ford’s edits.

Might there be a real, vampiric mermaid (Valeriia Karamän) on the island? Why is Thomas keeping the lantern they tend to himself at night? What happened to Ephraim’s predecessor?

There are riches (and no little fun) to be mined by the post-Moby patois: “Should pale death, with treble dread, make the ocean caves our bed, God who hears the surges roll, deign to save the suppliant soul: To four weeks,” runs Thomas’s opening gambit, leading to the first of many disagreements.

This increasingly demented psychological horror borrows its title (but no more) from an Edgar Allan Poe fragment. Spiritual advisers Samuel Taylor Coleridge and Robert Louis Stevenson cast shadows across the intriguingly murky mythology: Thomas believes that gulls house the souls of drowned sailors, a superstition that creates friction between Ephraim and birdkind.

Cinematographer Jarin Blaschke has rightly been shortlisted for an Academy Award for his claustrophobic 1.19:1 aspect ratio monochrome, but ultimately, The Lighthouse stands as a monument to two titanic performances. Pattinson’s easy naturalism curdles into something unnerving and evil here, while Dafoe goes full German Expressionist villain with the biggest screen performance since Daniel Day Lewis in There Will Be Blood.

6 'Giving up a child for adoption has a lifetime impact'

Ireland and the Nazis: a troubled history