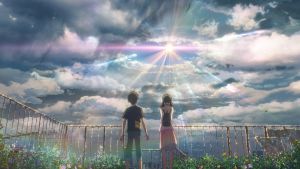 Weathering With You: wacky mythology is offset with gorgeous hyperreal visuals

Film Title: Weathering with You

Long before Makoto Shinkai’s Your Name became the highest-grossing anime of all time, he was on the radar for most genre fans. His early shorts, She and Her Cat and Voices of a Distant Star, were captivating enough to earn him a reputation as “the New Miyazaki”.

Weathering With You, his sixth animated feature, isn’t as elaborately imaginative as some of his earlier films, including The Place Promised in Our Early Days, 5 Centimeters per Second, and Children Who Chase Lost Voices. But it is transportative and panting with puppy love.

On his way to Tokyo, runaway teen Hodaka Morishima is almost drowned in a freak wave. He’s rescued by a shaggy publisher of urban myths named Keisuke Suga. Hodaka struggles in the Japanese capital, where he is too young for most legitimate employment or accommodation. He turns to Keisuke Suga, who gives him a roof over his head, but not before Hodaka has a run-in with two hoodlums over a teenage girl named Hina.

She, it transpires, possesses the same weather related psychic abilities that Hodaka has been writing about Keisuke. She is, in fact, “a 100 per cent sunshine girl”. With a prayer, she can halt the city’s now omnipresent rain. Thus, she and Hodaka start a small business, offering sunny spells that will allow flea markets, remembrance ceremonies and fireworks to take place between otherwise unending showers.

Powered along by the J-Pop of AKB48 and Gen Hoshino, Japan’s highest-grossing film of 2019 bundles the highs and lows, thrills and humiliations of teenage romance. The wacky mythology is offset with gorgeous hyperreal visuals, as raindrops bounce off umbrellas and puddles. With more than a nod to real world climate change, Weathering With You clings to love in the face of rising oceans and environmental catastrophe.