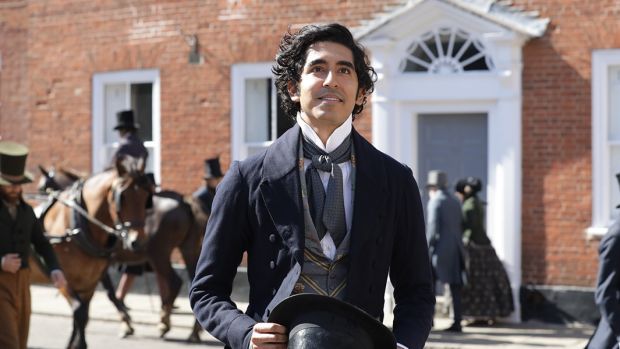 Dev Patel in The Personal History of David Copperfield

Armando Iannucci has had a bad idea for a film here. There are fewer feature adaptations of David Copperfield than you might think (it’s a full 50 years since the last one played in cinemas), but we’re coming down with “faithful” variations on competing 19th century texts. Not another! Set it in space. Play it backwards. For heaven’s sake don’t try and pack the whole thing into two hours.

Against the odds, Iannucci has delivered a minor miracle. Somehow or other, he has managed to touch all familiar elements over 119 consistently delicious minutes without allowing the slightest whiff of compromise. Of course, it feels hurried. But Iannucci’s great trick is to make that hurtling momentum a vital part of the experience. The dizzying rush is its own delight. Only the dullest purist will object. Few unfamiliar with the source will be bored.

The film begins in a theatre with the adult David (Dev Patel) reading the completed novel – or do we mean autobiography? – to a keen audience. That conceit allows the script to self-consciously correct itself as it misremembers and edits its own source material. In the film’s most audacious narrative chicane, one well-known character (nobody’s favourite, it should be said) is tidied away because he or she “doesn’t fit”.

Dickens’s habit of assigning linguistic leitmotifs to characters greatly assists Iannucci’s rearrangements. Ben Whishaw needs only to assert his ‘umbleness to become the disingenuously modest Uriah Heep. A few vapours of unwarranted optimism turn Peter Capaldi into a stringier Mr Micawber than we have previously encountered. Among the many things Tilda Swinton was born to do, playing the stubbornly eccentric Betsey Trotwood – who seems a typical Dickensian grotesque, before deliquescing into the soul of compassion – is surely towards the top of the list.

The temptation is to fill such a review with hurrahs for the impeccable casting throughout. Were we so drawn, we would single out Hugh Laurie for a touching turn as the mentally troubled Mr Dick (whom Bestey Trotwood kindly treats as the wisest of us all). We would also feel compelled to acknowledge gorgeous contributions from two domestic treasures: Bronagh Gallagher is boundlessly forgiving as Mrs Micawber; Rosaleen Linehan makes a Beckettian misery-guts of the sea-wary Mrs Gummidge.

Such a catalogue would, however, fail to acknowledge the brilliance with which Iannucci has structured the hurtle from happy infanthood to miserable adolescence to hectic young adulthood. Overlapping narratives smooth transitions that, even in the novel, sometimes seemed episodic (because they were). Unsurprisingly for a person with his background, Iannucci, adapting with long-time collaborator Simon Blackwell, has brought up the comic tones and allowed the tragedy to play as undercurrent.

This causes some surprising alterations: Mr Wicksteed (Benedict Wong), a grimly doomed alcoholic in Dickens, here becomes a comic drunk that Buster Keaton would have appreciated. Peggotty (Daisy May Cooper) gets less opportunity to be the young hero’s saviour. It all works in the context of Iannucci’s construction. So why worry?

The most striking innovation is the diverse casting. It’s important to clarify what’s going on here. Cinematic depictions of 19th century London have traditionally underestimated the city’s racial variety, but the filmmakers are doing something more than merely reflecting contemporaneous demographics. Patel’s David is apparently the only person of South Asian descent in his immediate family. Steerforth (Aneurin Barnard) is white. His mother (Nikki Amuka-Bird) is black. The film profits from the sort of “racially blind” casting – and it does profit – that has long been commonplace in theatre. No term better sums up the Dickensian aesthetic than “generosity” and the busy clatter of cultures yells that word throughout.

Certainly the best Dickens adaptation in the cinema since Christine Edzard’s Little Dorrit 30 years ago. Maybe the best since David Lean.

William Shatner: ‘We were so in love, and she was drinking, but I didn’t understand addiction’

Why did the Irish volunteer as British officers in WWII?